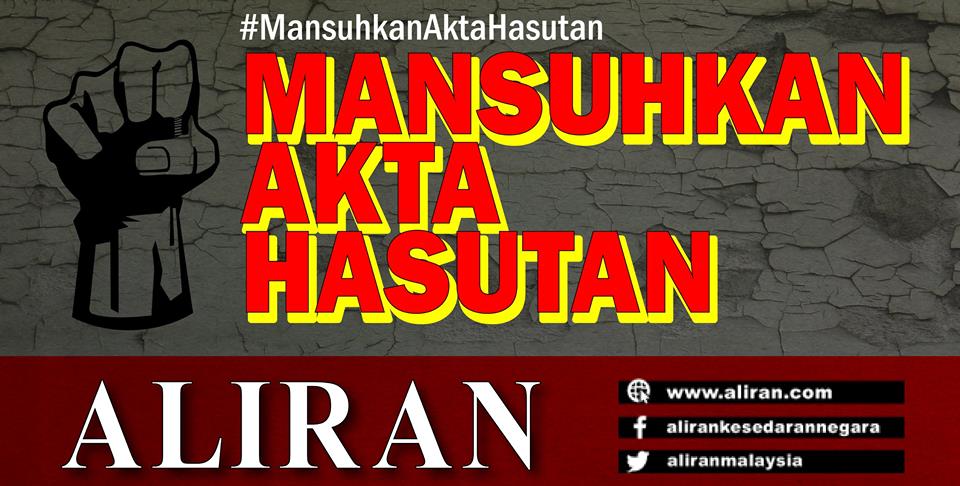 The use of the Sedition Act and other coercive Laws by the Umno-BN government allows it to perpetuate its control of the rakyat, observes Francis Loh.

In this Aliran Alert, we invite all readers to check out Aliran’s Crackdown Watch on our website.

It is a list of the spate of detentions of Malaysians, especially during 2014 and 2015. Preparing this list has been hard and copious work; it has taken us many weeks. It has also made us realise how the Sedition Act and other coercive laws are being used by the Umno-BN government to deny the Malaysian people their fundamental right to express themselves, to assemble, and to associate as enshrined in Article 10 of the Federal Constitution.

We do realise that our list is incomplete. So, we invite all who are in the know to alert us of names of detainees who are absent from this list. As well, if there are errors in the details of a detention, please inform us at aliran.malaysia@yahoo.com so that we can make the necessary corrections. We thank you in advance for your help and co-operation.

When we began this initiative, our intention was to gather in one comprehensive list the names of all detained under the Sedition Act over the past two years. (At the back of our minds was The ISA Watch which we conducted for over a decade until the ISA was finally repealed; we still have the list of the last few detainees shown on our website, though they have most likely all been released by now.)

No doubt, we felt our new list would reveal certain patterns on how the latest detentions have been conducted and be useful to all intending to assist those detained. It is also compiled in Solidarity with the detainees, in the interest of documenting the Truth, and in pursuit of Justice.

But while compiling this list, we soon discovered that the Umno-BN government was also using other coercive laws like the Peaceful Assembly Act, 2012 (PAA), the Penal Code (PC), and even the Communications and Multimedia Act, sometimes independently, and sometimes together with the Sedition Act, to detain its critics.

The targets included those who offered academic opinions on issues or posted critical remarks on social media and those who participated (and even those whom the authorities thought were organising or planning to participate) in public rallies. Hence this list includes all detained recently whether under the Sedition Act or the other coercive laws.

Thereafter, in late 2014, and throughout 2015, especially after the Federal Court had found Opposition Leader Anwar Ibrahim guilty in the Sodomy II case, it appears that the Sedition Act has been used almost unceasingly against the Opposition, and to curb criticism and dissent generally.

With its recent amendment, the Act has become even more coercive and an even more useful tool to curb dissent and opposition. At a time when ordinary Malaysians in the hundreds of thousands are prepared to turn up for a demonstration, as in the Bersih 2.0 rally, and have not been unprepared to express themselves in the alternative media including social media, the Umno-BN government must be hoping that tightening the Sedition Act and resorting to the other coercive laws will enable it to reverse the trend towards democratisation. Of course, they are wrong!

Below, we give you some highlights and patterns from our investigation.

Usually, detentions are conducted while an event like a protest is ongoing, as in the case of those who conducted a sit-in in front of the Customs complex in Kelana Jaya to protest against the implementation of the GST on 23 March 2015. Or it can occur just after an event as Datuk Ambiga Sreenevasan, YB Rafizi Ramli, YB Anthony Loke, YB Dr Hatta Ramli, etc, and 29 other youths were called in after the massive 1 May rally to protest against the GST in the KLCC vicinity.

More often, individual ‘suspects’ were called to report to the police stations for questioning after a police report had been lodged against a particular individual for writing an article (like academicians Dr Azmi Sharom and Dr Abdul Aziz Bari) or for expressing themselves in a tweet (like Lawyers for Liberty co-founder Eric Paulsen).

But there were also cases where several hooded and armed policemen were sent in cars to arrest particular individuals in the middle of the night, as in the cases of YB Khalid Samad in Shah Alam on 29 March and Pas deputy president Mohamad Sabu in Sungai Dua, Penang on 28 March. In veteran activist Hishamuddin Rais’ case, he was abducted and forced into a car as he was on his way to a Duduk Bantah protest near Dataran Merdeka on 27 March 2015.

The questioning and recording of a statement, including the long wait in the police station, usually lasts several hours. So individuals who are arrested late in the day are usually held overnight. If it is necessary that questioning is needed beyond 24 hours, they must then be presented in front of a magistrate during remand applications for periods of up till four or seven days depending on the offence. Often, remand is granted for one to three days. But the magistrates have also refused remand on many occasions.

There is usually a time-lag between their release and their being charged in Court. In the event, they must show up in Court when charged, get a lawyer to defend them, post bail if needed, so that they can be released. The entire procedure, even before one appears in Court to answer the charge, is time consuming, if not also expensive. It is almost as though the processes of getting arrested, having one’s statement recorded, and going to Court, which could drag on and on, are designed to discourage Malaysians from claiming their rights to free speech, association and assembly!

A judgment by the Court of Appeal in Nik Nazmi Nik Ahmad v Public Prosecutor [2014] 4 CLJ 944 unanimously reaffirmed the constitutional right to assembly peacefully as a fundamental right of all Malaysians.

We must not allow Umno-BN to reverse the ongoing process of democratisation in Malaysia. Hopefully, Aliran’s Crackdown Watch will be empowering for Malaysians.