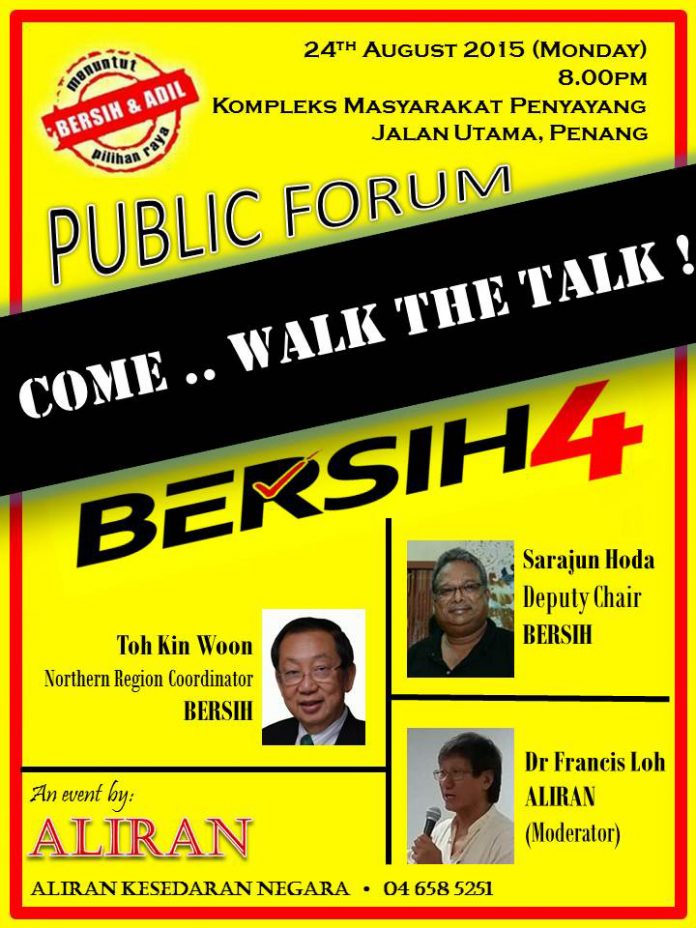 The rakyat must really stand up and be counted, says Henry Loh. We are tired of being given the runaround.

It is time to walk the talk.

Many months have passed since questions were raised publicly as to how 1MDB racked up such a monumental debt of over RM42bn and whether the corporation has sufficient funds and resources to honour these debts.

Of course, 1MDB is not some private concern which can be simply liquidated , leaving little or no recourse to its debtors. No, it is a company owned by the Ministry of Finance, which has guaranteed many of its liabilities. This is what worries many Malaysians.

In more recent times, the greater concern has been the confirmation that as much as 670m US dollars (RM2.6bn) was credited into the personal account of Prime Minister Najib. The explanation provided, after much pressure from various quarters and with the provision of irrefutable proof, was that the money was a donation from a foreign country. The impression given was that the money was used to help fund the 2013 general elections and not for personal use.

But before we could even try to fathom just why someone, an organisation or even a country would give such a large donation to Umno (through Najib’s personal account), Sarawak Report alleged that as much as 600m US dollars was sent back to the Swiss-based Falcon Private Bank in Singapore. So far, neither denial nor confirmation of this allegation has been forthcoming.

In the last two weeks the ringgit’s value against the US dollar and many other world currencies has been in free-fall. At today’s exchange rate one would require RM4.13 to purchase 1 US dollar; just about two months ago, the exchange rate was RM3.40. The ringgit against the Singapore dollar has fallen to RM2.90 for 1 Singapore dollar and RM3.10 for 1 Australian dollar.

Support the struggle to build a Malaysia based on Justice, Freedom, Solidarity:
READ MORE:  Home minister must not interfere with police chief’s effort to clean the force

The government is quick to suggest that a lower ringgit is ultimately good for our exporters as it would make the prices of our exports relatively cheaper and therefore more attractive.

A weak ringgit on the other hand will make imported items more expensive and, fuelled by profiteering, will caused inflation to worsen. The negative impact would be hard on all those whose incomes remain stagnant while inflation gallops on. Inevitably and sadly, it will be the low wage-earners who will suffer the most.

Some of today’s economic trends in Malaysia are partly due to global economic trends – a consequence of the lower demand for Malaysian goods by our larger trading partners such as China and the United States. The economies of China, the US and many parts of Europe have slowed down.

But considering that the ringgit is currently Asia’s worst performing currency, we need to be more critical in identifying and analysing the underlying causes for such a decline. We should not allow the government to take the easy way out and pin the blame for our current situation soley on current global economic trends.

What is glaringly clear to any observer of Malaysia is that the authorities have not been transparent at all in the handling of the 1MDB fiasco and its many attendant problems and scandals.

The rakyat are upset and fed up that efforts to investigate and extract the truth over these monumental monetary concerns have been jammed and appear to have been sabotaged. The break-up of the current Public Accounts Committee, the sudden “resignation” of the attorney general, the dismantling of the 1MDB task force, the arrests of certain MACC officers and attorney general’s chambers staff leave a very bad taste in the mouth.

Hence it is no wonder Bersih 2.0 has decided to organise Bersih 4 to call for:

Bersih 4 will be held on 29-30 August in three cities in Malaysia – Kuala Lumpur, Kota Kinabalu and Kuching – and other cities worldwide.

Come and attend the forum to show your support and find out in greater detail what is going on and how we as responsible citizens can respond to the current situation. The rakyat must really stand up and be counted. We are tired of being given the runaround.