If Aliran founder member Ismail Hashim had been alive today, he would certainly be shaking his head in disapproval over recent disturbing episodes, writes Henry Loh.

22 June 2014 marked the first anniversary of the death of one of Aliran’s seven founder members, Ismail Hashim, who was tragically killed in a road accident a year ago.

The discussion that followed was led by Malaysian artist and the exhibition’s curator Wong Hoy Cheong. What emerged from the discussion was that Ismail upheld universal values, was totally against extremism and had a strong intolerance of hypocrisy. As an educator he was ever willing to share his knowledge and skills with his students and others. As an activist, he fought for a better Malaysia – a consistent and avid campaigner for justice, freedom and solidarity.

For those who live in Penang or plan to visit the state between now and 31August, do not miss the golden opportunity to visit the exhibition of Ismail’s photography and accomplished art work.

If Ismail had been alive today and were to observe some of the latest events and incidents that have been hogging the headlines, he would certainly shake his head in disapproval and lament with great disappointment.

He certainly would not support or condone the refusal of Jais to return the 321 bibles seized in January 2014 from the Bible Society of Malaysia (BSM), especially after the Attorney General’s chambers had announced that BSM had no case to answer.

He would also be most upset that religious authorities would stop a funeral (and snatch away the dead body) or interrupt a wedding on suspicion that the deceased and bride respectively had converted to Islam.These acts are so insensitive and devoid of compassion.

Dr Jeyakumar Devaraj, the Member of Parliament for Sungei Siput, wrote an open letter to Pas MPs urging them to challenge the decision made by Jais and to show Malaysians that the brand of Islam upheld by Pas is more just and compassionate – different from that practised by Jais.

Popular columnist Marina Mahathir believes that the arrogance and pride of some of the country’s leaders is causing them to make decisions that fail to make any good sense. “Pure arrogance is what makes them disobey court orders…”

Marina laments, “Yet we were once a civil and progressive country, where people respected one another and got on fine..We are no longer the country we once were. The question is, why?” Statesmanlike leadership is so sorely lacking.

Many Malaysians are without doubt disturbed and perhaps even fearful of the rather common manifestations of violence and threats of violence. The recent storming of the Penang State Assembly, the hate rhetoric mouthed by groups like Isma and Perkasa all serve to escalate tension and instil fear. Syerleena urges right-thinking and peace-loving Malaysians not to fall into these sinister traps that represent a cancer within the system.

On 6 May, Isma president Abdullah Zaik remarked that Chinese migrants brought in by the British to Tanah Melayu were “trespassers”, and he questioned the citizenship and wealth given to them. Such remarks wouldno doubt lead to tension and misunderstanding which in turn would hamper and damage ethnic and religious relations in our country. Acting on police reports and after due investigation, the Attorney General’s office has decided to charge Abdullah for an offence under the Sedition Act.

Although we in Aliran are disturbed by the uncalled for and provocative remarks made by the Isma chief, we are totally opposed to the AG’s decision to charge Abdullah with an offence under the Sedition Act. We urge the authorities to charge the Isma chief based on other existing laws and we call on PM Najib to keep his promise made two years ago to repeal the Sedition Act.

Although the political and social landscape in Malaysia today is rather discouraging, we should perhaps draw some inspiration and hope from two politicians who although they are in opposing camps have nevertheless decided to put aside political differences and come up with a book on “new politics”. The duo – Saifuddin Abdullah of Umno and Mujahid Yusof Rawa of Pas propose that “MP s should vote according to their conscience in the Dewan Rakyat and not on political ideologies” and “we must start considering bipartisan politics for the good of Malaysia”.

Now, if the day comes when this brand of moderate, reasonable and principled politics takes hold – and politicians can agree to disagree without resorting to violence or threats of violence, then there may be some hope for our country.

Sadly, many of our current leaders fail to deliver on this score and it is we the rakyat who must rally together to stop the madness and let good sense prevail.

Fragmentation of Malays and intra-Umno conflict 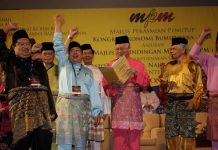 But are there any good sense left ?

Good sense is still prevailing among most of the common people of this country who choose to act rationally and with much restraint despite being continuously stirred and provoked by the words and acts of the likes of UMNO, Perkasa, Isma, Jais, Mais, TDM amongst others. I believed that those who are involved in all the acts of madness are in fact minority individuals or groups with their own selfish agendas. However, the worrying part is that these rascals, probably emboldened by the inaction of the authorities, are seemingly trying to outdo each other for the purpose of getting the attention of the public, media or even their patrons.