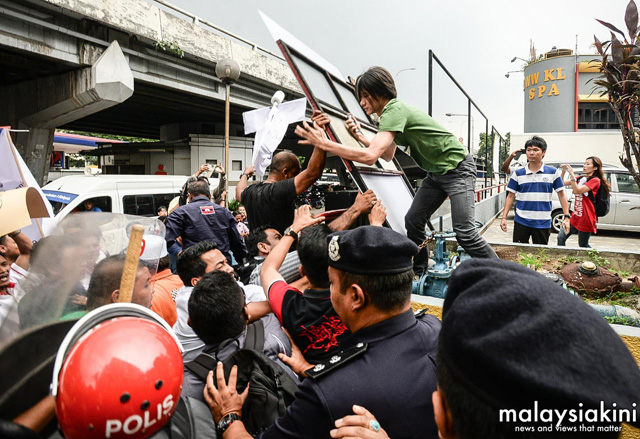 It is disheartening to note that gutter politics has taken hold in the Teluk Intan by-election campaign and elsewhere, says Christopher Chong.

In the past few years, we have been witnessing the disturbing rise of political hooliganism. The most recent one being the protest over Penang DAP Adun R S N Rayer’s outburst in the State Legislative Assembly. This resulted in a mob protesting over the outburst by storming into the august assembly, which was in session, demanding to see Rayer to protest over the Adun’s outburst.

Although Rayer’s outburst in the assembly was uncalled for and certainly deserved a censure and an apology from him, the unruly behaviour of the protestors was even more appalling. By storming into the State Legislative Assembly, they crossed the line of voicing a legitimate protest, which could have been done outside the building, and acted like hooligans within the august assembly.

More disturbingly, this act of political hooliganism did not end there but was to spread to other states as well. The DAP’s offices in Kuala Lumpur and Pahang and the State Assembly in Penang were visited by mobs who issued threats and warnings or attempted to vandalise the exterior.

As Malaysians, we should condemn such acts of political hooliganism before it becomes entrenched in our political culture – which would only lead to a deterioration of the Malaysian democratic process.

Turning now to Teluk Intan, it’s disheartening to note that gutter politics has taken hold in the by-election campaign there. The DAP’s candidate, Dyana Sofya was a target of a smear campaign: a doctored photograph showing her in a bikini (when in fact the person in question was a Filipino actress) was disseminated on the web as well as to the pubic in Teluk Intan.

She was also accused by certain parties of being a pawn in the DAP’s internal political machinations which includes capitalising on her looks among others. The public should take to task those responsible for such a reprehensible campaign.

Turning from politics to the issue of the skyrocketing prices of house prices, the MP for Sungai Siput, Dr Jeyakumar Devaraj, gave his views on the government’s response on this issue. As prices continued to soar beyond the reach of ordinary Malaysians, the government must commit more resources in looking at ways to resolve this problem.