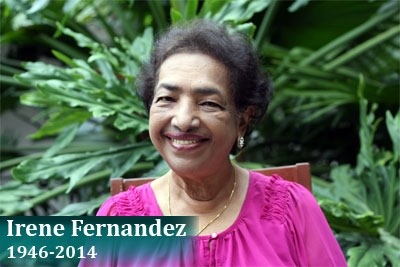 Mustafa K Anuar pays tribute to Irene Fernandez and others who have defended the rights of ordinary Malayians.

She was initially accused of peddling false news when she tried to protect and promote the collective welfare of migrant workers and the downtrodden.

Dragged for years in court, the late Irene Fernandez nonetheless was steadfast in her determination to champion the cause of the neglected. In fact, she spent decades via her NGO Tenaganita, which she spearheaded, to fight for the rights of the oppressed whose dignity as humans were trampled by employers and others who didn’t care two hoots about human rights.

The Malaysian government may not want to recognise, let alone appreciate, Irene’s tireless work. But concerned Malaysians and civil society have duly paid glowing tribute to this towering Malaysian. Her liberating spirit and noble values will indeed live on especially when the rights of workers are still being violated in our society.

Such violations demand the attention and action of civil society groups and those who are dedicated to improving the welfare of workers. It is no wonder that over 50 civil society groups have come together to protest against workers’ rights violations and the disciplinary action initiated by the management of the much-troubled MAS against the secretary-general of the National Union of Flight Attendants Malaysia (Nufam) and 30 other members.

Likewise, some civil society groups have expressed solidarity with Major Zaidi Ahmad of the Royal Malaysian Air Force who is now facing legal action for doing what a conscientious Malaysian is expected to do. Like the late Irene Fernandez, Zaidi found himself in trouble with the powers that be for speaking truth to power. Obviously this doesn’t speak well of the Najib administration, which once boasted of a Malaysia being the best democracy in the world.

Support the struggle to build a Malaysia based on Justice, Freedom, Solidarity:
READ MORE:  Tackling forced labour must include massive overhaul of official policy and attitudes

That brazen claim (being ‘the best democracy’) is indeed indefensible. In fact, this assertion becomes all the more untenable when press freedom is once again violated by the federal government. Recently, the Home Ministry denied publishing permits for the print editions of Malaysiakini and FZ Daily. The minister concerned was apparently concerned that ‘too many’ newspapers in our midst would confuse ordinary Malaysians who are exposed to too much information.

Such a paternalistic and patronising attitude is certainly misplaced and unfortunate given that Malaysians in general are able to think for themselves. They certainly deserve a wide range of opinions about particular issues before they make their informed judgement. At the very least, they are not confused and know how to discern which politicians make imbecile remarks and which ones make perfect sense.

Concerned Malaysians are also not confused when they bear witness to a hate-mongering mob out to create trouble. But they ARE disturbed when the powers that be, otherwise ever so often mindful of actions that could purportedly jeopardise ‘political stability’ and ‘national unity’, refuse to take action against these trouble-making hate-spewing groups.

One person who does appear to get easily confused is Ibrahim Ali (or those of his lk), who often acts as if his faith is quite brittle.

In the meantime, ex-premier Mahathir Mohamad seems to have overcome his oft-shaky memory when he admitted he was actually in the country on 19 November 1985 during the terrible and bloody Memali incident, which has yet to achieve closure.