The suppression of information from citizens during a pandemic is detrimental to any country on many fronts, Ch’ng Chin Yeow writes.

Liberal democracy is most important in times of crisis, as revealed by the present coronavirus pandemic.

Potentially, the failure of China’s autocratic system in handling the coronavirus pandemic could have caused its self-decimation.

Had China not been pressured by the anger of its netizens to change course in its handling of the pandemic, the Communist Part of China’s (CCP’s) grip on power would have been put to the test by revolt. And its ability to contain the outbreak would have been impossible.

Failure of autocratic system during pandemic

Democracy is transparency with checks and balances. The media and the opposition parties play a very important role in making sure that there is accountability and transparency.

In an autocratic country like China, netizens are actually an important voice in making the government accountable.

But widespread censorship distorts and diminishes the voices and the power of the people. And with cybertroopers flooding cyberspace with patriotic and nationalistic messages (we receive lots of these messages in Malaysia), netizens’ messages are further drowned.

The successful spread of these patriotic and nationalistic messages around the world shows the importance and the success of this tool of persuasion and propaganda in China. The ability of netizens to provide checks and balances is drowned and restricted.

Did we not witness such propaganda machinery at work when Najib Razak was Prime Minister? Together with censorship, cybertroopers suppressed and distorted the people’s voices while churning out fake news, thereby drowning out our ability to provide checks and balances. Luckily, we had VPN (virtual private networks) to tune in to alternative true narratives, so we were not fooled.

To crack down on alternative narratives, China has passed laws banning VPNs it does not approve of, prompting Apple to remove apps that don’t comply from its China app store. Censorship knows no boundaries. The ends justifies any means.

Is an autocratic political system superior to a democratic system in times of crisis like the coronavirus pandemic?

China’s instinct was to use its censorship to block any news it sees as a threat to its grip on power and control. In its handling of the coronavirus pandemic, the CCP immediately blocked the news about the outbreak as shared by Dr Li Wenliang.
Dr Li had shared with his colleagues and warned them about a Sars-like virus in Wuhan. His private message was widely shared among netizens.

The CCP immediately cracked down on the sharing of this news and immediately forced him into confessing that he was spreading rumours, which he did under duress.

When Dr Li ultimately died from Covid-19, the outpouring of anger and outrage towards the CCP was overwhelming, as the official narratives did not support what the netizens witnessed on the ground.

Inevitably, the CCP had to turn away from its natural instinct to censor and crack down on its citizens, and instead it embraced the truth about the real threat of Covid-19.

The reversal of its tendency to give out alternative information and narratives in this crisis and to keep the truth from its citizens is actually what ultimately saved the CCP from the first real test to its autocratic system through revolt. In the process, it also averted the worst pandemic outbreak in China.

Dr Li has now been made a martyr posthumously by China, in recognition of his courage for telling the truth about Covid-19, contrary to the original allegations that he was spreading rumours, for which he was reprimanded.

For this unintended positive consequence of turning away from its natural instinct to use censorship, China has gained praises from around the world for the way it has handled the pandemic. It also gained credence for its autocratic political system.

Is transparency and accountability associated with a democratic system such a bad thing? Don’t forget, had China not woken up from its instinct to use censorship, its authoritarian regime would have been put to the test by revolt. The pandemic would have spread all across China, just like any other country.

South Korea and the US recorded their first case of Covid-19 on the same day, 20 January. Both these countries are liberal democracies.

South Korea has averted catastrophe, successfully containing the coronavirus pandemic through widespread testing – a correct decision by its government.

On the other hand, the US did not do any testing until the problem was too big to contain, weeks after the outbreak. This was due to the Trump administration’s fear of the news of the outbreak affecting the US economy.

First, President Donald Trump refused to allow the use of testing kits jointly developed by China and Germany, and second, he prohibited the states from testing using the states’ very own test kits. His intention was to protect his re-election chances by rose-tinting the financial figures, by prohibiting testing. He has, until now, continued to lie to cover up his blunders by twisting facts and blaming others.

The failure to contain the spread of the coronavirus in the US was the fault of one man, Trump, an elected autocrat. His autocratic power stems from the fear of the people from within his party to speak out against him for fear of repercussions and reprisals. He has successfully silenced two of the other three branches of government, the executive (Senate) and the judiciary (the attorney general is his echo).

Had the US implemented its true form of democracy by curtailing Trump’s autocratic power, the pandemic would have at least been minimised, if not contained.

Democracy is truly the only form of government for any situation, especially in times of crisis. Checks and balances are most crucial. In critical times in history, as in this pandemic, the suppression of information from citizens is detrimental to any country on many fronts.

A manageable problem can become unmanageable. The ultimate revolt from citizens when a crisis spins out of control can ultimately decimate any country, especially an autocratic one with no alternative opposition parties.

At least, in the US, at the next presidential election in November, citizens can vote to remove Trump. He is an autocrat only for as long as he is able to successfully play his supporters against his critics. Other autocratic countries do not have such a luxury.

All that glitters in pawnshops is not gold 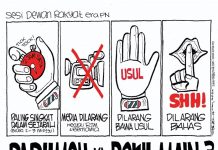