Benjamin Loh recommends that the central theme of the prime minister’s speeches should be social distancing – and everything else should be built around this core concept.

The movement control order has moved into its extended period, with the government having finally announced its stimulus package for those affected by the coronavirus outbreak.

One of the key principles of this package is that it would leave no one behind. But despite the large amount of one-off cash offerings and relief to citizens, the amount allocated to marginalised groups – people with disabilities, indigenous peoples, the homeless, the elderly and abused children – was a meagre RM25m, ie 0.1% of the entire stimulus package.

Considering these are the most vulnerable, in need of support and most likely to be left behind, the financial support for them was astonishingly low.

Incomprehensive acts like these were but one of many other missteps over the last couple of weeks since the government announced the movement control order on 16 March.

Vital aspects of the order were poorly communicated and restrictions were not well thought through, resulting in embarrassing U-turns. The public response suggests that many were not aware of the real aim of the order, ie to instil social distancing.

This debacle suggests that the use of health and policy communication experts in devising policy was distinctly lacking. The movement control order was indeed necessary as similar restrictions had effectively limited the coronavirus spread in other countries.

But, as policies go, this approach of “flattening  the curve” was not quite obvious to the average person, who was unfamiliar with a viral outbreak and its devastating effects on healthcare infrastructure.

As such, the policy had to be communicated effectively to the people so they understood the rationale behind the order and knew instinctively what should and shouldn’t be done.

By employing the framework of the “theory of planned behaviour”, a popular communication theory to examine decision-making, the Malaysian government could have picked up on several reasons why people behaved the way they did since the announcement on 16 March.

The theory suggests that people’s behaviours are influenced by three factors:

For example, if someone wanted to steal, they would probably do it if they had a positive view of stealing (attitude), realised that many others were doing it (subjective norm), and if they felt they would not be caught by police (behavioural controls).

Many were (and probably still are) unaware of the virus’ high infectious rate in high-density areas. People were told to go home, stay there and leave only to get essentials.

Up until this point, despite the high number of cases, no deaths had occurred. This assured Malaysians that the outbreak would probably be contained and they were not an imminent danger. As such, many Malaysians felt that the movement control order was wildly unnecessary and a huge inconvenience.

In reality, the main purpose of the order is to indirectly force Malaysians to practice social distancing. This was something that was not emphasised properly in the lead-up to the movement control order, hence the mixed reception.

Malaysians are known for their collective love of food. When it was acceptable for Malaysians to go out to buy essential items that include food supplies, you would expect them to want to buy the freshest and highest quality ingredients while being able to shop regularly.

Another subjective norm was when the phrase “go home to your families” was used. This has a slightly different meaning for domestic migrants who often work in big cities, leaving their families in their home towns in other states of Malaysia. “Home” to these people means their home town or where they came from.

When university students were removed from their dorms and told to “return home”, “going back to your home town” seemed like an acceptable interpretation.

Initially, there was no restriction or ban on inter-state travel, and so people felt that it was perfectly acceptable to travel back before the movement control order came into force. Many focused on returning home, not thinking about the implications of crowding at bus terminals for last-minute tickets.

The government has stressed that the movement control order was not a declaration of a state of emergency, which many Malaysians would be quite familiar with.

Whether it was the 1969 race riots, the communist insurgency, or the haze, Malaysians have a strong mental image of what the term “state of emergency” entails. It is dangerous outside, so stay home and do not leave.

When the government differentiated the movement control order from a state of emergency, Malaysians instinctively assumed that the situation was not as dire as implied.

This behaviour is in line with the cultural dimension of “high power distance”,  where people feel disconnected from the government. In Malaysia, which has high power distance, many people engage in more informal activities, disobeying government directives due to a lack of enforcement, with high levels of corruption.

With this in mind, you could make some very plausible assumptions about how some Malaysians would behave under the movement control order, ie they would ignore anything that inconvenienced them. As such, this order would have to be strongly enforced through very direct indications of government enforcement, including emphasising the penalties for not observing the order.

The initial announcement merely indicated that roadblocks would be in place. But there was no clear indication of the actual rules determining when and on what grounds people would be allowed to leave their homes. With no clear rules, people then interpreted them very differently.

READ MORE:  Developing soft skills in the line of duty

Furthermore, these rules seemed to change frequently, painting an image of a government that was clueless and unable to plan ahead. With this image in place, people felt anxious and despondent as they lost faith in the powers that be.

Just by examining the fallout from the initial announcement, it was clear the government had rushed the preparation and execution of the movement control order.

Other issues remain unaddressed such as the uncertainty over job security, which left many unsure if they would have jobs to return to once the movement control order was lifted or if their employers would still be in business.

There is still time for a course correction. We are now midway through the movement control order (as extended).

The prime minister’s stimulus package speech was more emphatic and people-centred. But there is still room for improvement as Malaysia digs in for a longer fight against this global pandemic.

The next time the prime minister makes a speech, he needs to reassure the public that his government is competent and mindful of those in the margins.

I highly recommend that the central theme of the speech be social distancing and everything else should be built around this core concept.

To accomplish that, I strongly urge the government to better incorporate Malaysian academics and communications practitioners who understand local communities. They will be invaluable in shaping more effective policies that will calm the populace and unite us all through these dark and harrowing times.

Dr Benjamin Loh is a senior lecturer and programme director at the School of Media and Communication at Taylor’s University. He works on online marginalised communities and the digital public sphere

Developing soft skills in the line of duty 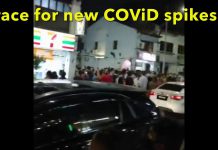