In a rhetorical stance, the Home Minister Datuk Seri Syed Hamid Albar posed this question to Datuk Seri Anwar Ibrahim, “What is he afraid of?” Aliran would like to pose this very question to Syed Hamid, “What is he afraid of?” Why are they afraid to release the police report lodged by Mohd Saiful Bukari Azlan against Anwar Ibrahim on 28 June alleging sodomy?

Justice demands that an accused person should know what he is being accused of. Only then he can defend himself. It is ridiculous for the police to claim that Saiful had made a police report against Anwar and therefore they have to investigate Anwar. Isn’t Anwar entitled to know the nature of the report? He has a right to know when the alleged offence took place and where. This information is crucial for Anwar’s rebuttal.

If Syed Hamid is wondering why this information is urgent and necessary, Aliran would like to take him back ten years ago when a similar report of sodomy was lodged against Anwar. His accuser then struggled to name a date to make the allegation stick. He gave three different dates variously, including a date when the building where the alleged sodomy was deemed to have taken place was not even up! The accuser contradicted himself several times. He was even caught for khalwat, raising questions regarding his morality and reliability.

The injustice was so apparent in that episode of a decade ago that the Federal Court overturned the High Court’s controversial conviction.

Based on this experience, Anwar has every right to suspect that the police want to get as much information as possible from him so that the police report against him could be manipulated to incriminate him. Anwar had legitimately asked, “Is it so that they can keep amending and amending and amending it to fit in with the statement that I have just given to the police. I gave my statement for five hours yesterday (Wednesday) and for another 30 minutes this morning.”

He has raised a relevant and pertinent point: “If they give the report to me now, how am I supposed to know that it is the original? Are they waiting to make up the ‘perfect’ police report (to fix me)?”

The police report was inexplicably denied every time it was requested for on the premise that the police had been instructed against giving him a copy. Who is this faceless and nameless superior officer who had given this despicable instruction? If they are after the truth, shouldn’t they have released the police report so that Anwar himself would be in a position to assist the police in discovering the truth?

Do they realise that by refusing to release the report, the police are seen as believing Saiful’s side of the story and suspecting Anwar of being guilty? Where is the fairness? Both the accuser and the accused should be treated fairly and justly so that the truth can be laid bare in the interest of justice.

It is three weeks since the police report was made by Saiful. Why is it so difficult to make the report available to Anwar? Anwar has insinuated that both the Inspector-General of Police and the Attorney-General, who have been accused of having manipulated the evidence against Anwar in the past, could be the source and cause for Anwar’s predicament in this instance.

Deputy Prime Minister Datuk Seri Najib Razak had commented that Anwar should be accorded ‘the degree of decorum and respect he deserves’. Would he, having said that, now go the extra mile by instructing the police to release the police report to Anwar. If he does that, he would be walking the talk. 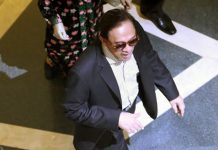 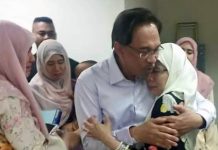