Well, it looks that the information Minister will have to eat his own words. He will have to believe what he sees. His eyes are not playing tricks. It is indeed true that concerned Malaysians did turn up in their thousands to demand clean and fair elections.

They were not intimidated by the heavy presence of the police and the FRU; they were not discouraged by the water cannons or the riot police with their shields and batons. These are brave Malaysians who have had enough of the arrogance of the powers-that-be. They are here to demonstrate to the democratic world that there are Malaysians who are prepared to stand up and march for justice.

In his arrogance, the Minister of Information sneered, "Do you believe thousands of people will be coming for the rally? Don't be so silly as to be taken in by them," he said, adding that even the Umno annual meeting could not gather such a number of people.

Well Zam, what have you to say now? These are ordinary people who don't need to be enticed with pocket money, transport and nasi bongkus. When you genuinely walk for justice, you are driven by noble ideals and propelled by sincerity. It is this commitment to the values that we hold dearly that has brought out people in solidarity to raise an issue and to state a point.

What has Nazri to say about this mammoth crowd who braved the rain and faced the risks involved and displayed an indomitable spirit to seek justice and right the wrong? He had haughtily dismissed the crowd of 2,000-odd lawyers who also had marched in an attempt to stop the rot in the judiciary as being in the minority.

Well, Nazri if you had dared to persuade the police to allow the proposed march to proceed unhindered, then you would have witnessed a crowd that would have been bigger than the Kesas Highway gathering.

It is because the Barisan government does not want the people of Malaysia to witness how upset and unhappy many Malaysians are – that is the sole reason that they had brought in their mighty strength represented by the police and the FRU with the sole purpose of disrupting the gathering. In this way they had hoped that Malaysians would not get to witness the truth that exposed their lies and distortions.

What took place today was a peaceful, democratic and legitimate exercise undertaken by concerned Malaysians to seek a remedy for our tainted, lopsided elections. Whatever may be said in defence of the Election Commission or the manner in which elections take place in our country, the truth is that there has never been equal opportunity to fight clean and fair in the general elections. It has been always tilted in favour of the Barisan Nasional, which abuses state facilities and state coffers to entice the electorate – and that must be seen by any impartial observer as clearly constituting corruption. 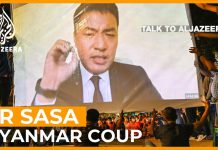