Aliran congratulates Pakatan Harapan (PH) on winning the general election. The unthinkable has happened. The myth of the invincible Barisan Nasional (BN) has been shattered. A corrupt regime has finally been brought to an end. It is a proud moment in history for all Malaysians.

Aliran salutes the people of Malaysia who rose up, braved the odds stacked against them and used their vote to make this happen. We salute too the many women and men who worked (many of them for decades) in bringing about the awareness necessary for this change to take place.

The outcome of the general election is a testament to the power of the people to bring about change. Around the world, Malaysia has set a good example – that of People Power and that of a peaceful transition of government.

We have witnessed a hope come to fruition. We must continue to expand and consolidate the autonomous public space outside the control of the state, the government, political parties and private business, and which is in the hands of civil society itself. So now another phase and type of work begins.

PH has a huge task ahead. Not only does it have to put into place a new government quickly, it has to put into motion the promises from the PH manifesto. PH has to work towards undoing the many wrongs (which have accumulated over decades) of the previous government. It is a task that will take time and effort. It will not be easy but PH must remain united, persevere and be guided by the rule of law.

We have seen how power corrupts and so it is essential that the change the people voted for must be nurtured and the democracy fought for, guarded well. For this, PH cannot afford to become complacent with the power it now has. Instead, it must use the power entrusted to it to adhere to the promises it has made.

Equally important is that PH must work towards dismantling the many structures which have kept the corrupt in power for so long. This also entails, among other things, curbing the power of the executive and the restoration of other institutions badly tainted by political interference.

There should also be a move towards greater autonomy for the various states especially Sabah and Sarawak in terms of jurisdictions, revenue collection and control of the civil service.

In this regard, we call upon the new PH federal government to restore local government elections. Decentralisation and elected local governments allow for greater initiative and participation by local communities, thereby unleashing greater energy at the state and local levels.

The people must remain vigilant and support and encourage PH to make these changes for the good of the country.

As we move onwards into a new era, Aliran will continue to pledge its support for good governance and democracy in Malaysia. 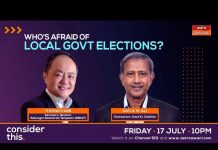