Aliran would like to respond to the letter to the press from Ramalingam Arumugam and Kalei Veane Shadevan, the joint secretaries of the provisional committee of the Selangor and Federal Territory Water Employees Association.

We believe that the memorandum by the Malaysian Trades Union Congress (MTUC) and the Coalition Against Water Privatisation (CAWP) was legitimate, justifiable and fair. Much of the information was gleaned from the media and other publicly available documents. In a democratic society, there is nothing wrong in raising questions and demanding answers. We simply want Syabas to prove that they have reduced leakages (non-revenue water) in the distribution system and to justify any proposed water tariff hike.

Over the past couple of years, civil society groups have continuously voiced their concerns over water privatisation and organised a number of forums and talks. Aliran Monthly has highlighted these concerns surrounding water privatisation in several issues of our journal and featured them as cover stories in AM Volume 25 (2005): Issues no. 2 & 4. Moreover, a memorandum was submitted to the Prime Minister on 24 January 2006. And yet, the joint secretaries claim “it seems obvious to us that Aliran, the MTUC, CAWP and other interested parties have never come forward to ask for information”.

The burden of proof should not lie with Aliran, CAWP or MTUC. Instead the onus should be on Syabas – as the sole supplier of water in Selangor – to open its books for an independent audit and to provide the information to the public.

Public authorities have a moral responsibility to disclose vital information to the public instead of signing secret agreements with crony companies. Transparency is essential especially when the government has committed itself to a payment of RM2.9 billion – funds that could have been used to improve health care and provide low-income housing for the people – to Syabas. As workers’ representatives, the joint secretaries should consider the long-term interests of workers who are going to be hard hit by higher tariffs following water privatisation. Irrespective of which side of the dispute the workers are on, they are the ones who will carry the burden of water privatisation in the years to come.

Aliran has consistently opposed water privatisation. We believe it is morally unjustifiable to privatise water – which is essential for human life – at a time when it is growing increasingly scarce. If higher tariffs are really necessary to improve water management and to encourage conservation, let these tariffs be paid to state-run water authorities. There is no reason for the public to pay higher tariffs to private water operators and contribute to their profits – especially when these higher tariffs cannot be publicly justified. 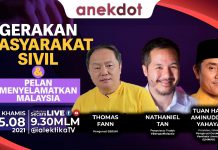