Aliran would like to echo the plea of secretary-general Jean-Francois Julliard of Reporters Without Borders requesting His Majesty the Yang diPertuan Agong to intercede in the case of Raja Petra Kamarudin who is better known as RPK.

RPK was detained under the ISA for posting certain articles in his web-page that were deemed to be a “threat to internal security.” He has been posting many, many provocative articles for years. His articles have been eye-opening, thought-provoking, sensational, and simply incredible. His web-page has an amazing number of daily hits, proving that he has a large following.

His readers are from all backgrounds. They are amused, angry or incredulous but no one has rioted or threatened the security of the nation because of RPK’s articles. This is why it is difficult to believe that RPK is a “threat to internal security.” There is no evidence even to hint of this possibility.

He is already facing a series of court charges for some of the articles. Aliran has no quarrel with this. If anybody felt defamed or hurt by his articles, the aggrieved party should sue him and take him to court. The government should not be suing RPK on behalf of the aggrieved party.

While some of the cases are on-going, why is it necessary to detain him under the ISA? Instead of resorting to the ISA, can’t RPK be pinned down by existing laws and taken to court to be judged for his alleged offence?

The obnoxious thing about the ISA is that there are no charges against a person and no right of defence is available to the unfortunate detainee. He is simply detained for no definite reason.

He was detained on 12 September 2008. RPK challenged his detention. The High Court released him on 7 November 2008. Can’t we let matters rest at that instead of pursuing it further to put him away?

As far as the people are concerned, the widespread perception is that the government is intent on putting him away because he has damaging information that could discredit the BN government. The BN is worried that his articles will expose the BN and ridicule it in the eyes of the public. This is a very persuasive belief.

Aliran hopes that His Majesty will intercede to ensure that every subject of his will be treated with courtesy and accorded justice, which is a fundamental right of a person.

Is there another way to settle Anwar’s claim of majority support? Yes, there is a simple solution! 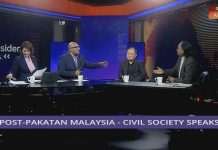 Insights on the current political crisis