Aliran is shocked and appalled at the death of Teoh Beng Hock, the political secretary to Selangor state executive councillor Ean Yong Hean Wah. Teoh was found dead on a fifth-floor roof-top of Plaza Masalam in Shah Alam two days ago after giving his statement at the Malaysian Anti-Corruption Commission (MACC) office, located nine floors above in the building. The circumstances surrounding the death are highly suspicious and if anyone is found directly or indirectly responsible, they should be brought to justice.

This horrific incident comes soon after disturbing allegations of the physical assault of a Simpang Renggam Municipal Council administrator in the course of an investigation, made in a police report lodged against Johor MACC officials. There is also the account by Kajang Municipal Councillor Tan Boon Hwa regarding the allegedly racist nature of his interrogation by MACC officers.

Further, the way the police behaved during the demonstration yesterday outside the MACC building is another cause for worry. The beating, the dragging, and the arrests were unnecessary. The pattern of behaviour being exhibited by the very institutions which should be upholding basic ethical standards has destroyed any credibility left in them. What is the point of calling for ‘transparent and open inquiries’ into alleged abuses and into the deaths of those in custody or under interrogation, when the institutions themselves have so clearly displayed prejudice, lack of accountability and indifference to public opinion?

Aliran demands an independent commission of inquiry to be established immediately to look into the suspicious circumstances surrounding Teoh’s death. An independent commission would be able to look into the many unanswered questions surrounding this tragic incident. This is urgent because we need to not only seek justice but also salvage whatever tattered reputation that the MACC still has.

READ MORE:  History should not repeat itself; kleptocrats cannot be allowed to rule

A thorough, transparent and independent investigation is necessary in the wake of a string of deaths in custody involving various enforcement agencies, the latest being the reported death of a suspected drug addict in police custody yesterday. For such an investigation to be carried out effectively, the MACC officers involved in the Teoh Beng Hock case including the Commission’s Selangor head must be suspended from duty.

A critical reassessment of the MACC’s standard operating procedure of investigation, supposedly adhered to by MACC officers, is urgently required as well.

Equally important, the MACC has to be held accountable for its perceived selective prosecution against the Pakatan Rakyat. The MACC has to be independent and fearless enough to investigate BN politicians such as the owner of a palatial mansion in Shah Alam.

We also call for a complete revamp of the leadership, ethics and workings of the MACC and for the establishment of the Independent Police Complaints and Misconduct Commission (IPCMC). The current climate of selective investigations, opposition harassment and allegations of physical abuse during interrogations are a discredit to both the police and the MACC.

This appalling incident must result in fundamental changes. Either the Prime Minister himself makes these changes, or we, the Malaysian public, must demand that they be made. Enough is enough. 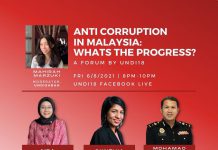