We note with grave concern the apparently growing tendency to use violence in situations of dispute or disagreement over public interest issues.

Barely 10 days have passed since film producer David Teo was slapped in front of the prime minister by someone who took offence at his remarks during a TN50 dialogue session with representatives from the arts industry at Seri Perdana on 17 May.

And now we have another reported slapping incident. This time, the Penang chief minister’s information officer, Major (rtd) Zaidi Ahmad, was said to have been slapped during an encounter with a group of about 10 protesters outside the Simpang Enam mosque. They were protesting over the state government’s alleged interference in the issuing of fatwas in the state.

Over the last year, politicians, Bersih 5 supporters and even reporters have also fallen victim to this growing culture of violence.

Aliran deplores the use of violence over disputes or differences of opinion. This increasing use of violence seems to have been building up over the last few years in aggressive protests and threats of violence which go beyond the accepted norms of peaceful assemblies.

If such aggressors and bullies are not brought to account, it will only embolden them and encourage others to follow suit. Not to mention the message it sends out to the younger generation ie that violence and uncouth behaviour is acceptable.

The authorities must warn the public that such acts of violence will not be tolerated and take immediate action to bring culprits to book. Violence must not be allowed to take root in our culture. 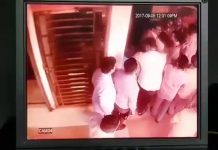 It has been cultivated by their leaders so the followers just obey their orders. This has not been written in any spiritual books.

The top never condemned the first act, showing as if it is ok to do it to the public… It may become a norm if not stopped… Sedihnya😔 😔

NOW MORE MALAYSIANS ARE SETTING GOOD EXAMPLES FOR OTHERS TO FOLLOW. LOOKS LIKE ‘CIVILIZATION’ IN THE COUNTRY IS ‘OVER’. WE ARE LIVING WITH THUGS. 🐽

Not culture but biadab.

Culture? Are you sure??

As good and civilize rakyat Malaysia, we must not generalize the entire race and/or religion just because of a few nincompoops who purposely misbehave for a few peanuts. Their behavior is surely not in congruent with the religion they supposedly practise and obviously a disgrace to bangsa, kaum dan negara. These “slapping” incidents have arisen due to childish politicking play to confuse the morr intelligent rakyat. A mockery to the holy month of Ramadan.

Should have retaliate … in self defence!

(Many) only follow the rituals in Islam. Their other senses concerning Islam are completely blocked.

They looked good on the outside but violent on the inside…
Why ?

PM never condemned the violence occurred infront of him. Is serious.