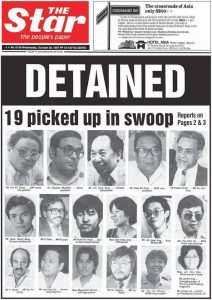 Today is the eve of the 30th anniversary of Operation Lalang which saw a political crackdown and the detention of over 100 individuals under the infamous Internal Security Act (ISA) and the shutting down of four newspapers which were said to have been critical of the then government.

The Star, the Sunday Star, Watan and Sin Chew Jit Poh had their publishing permits suspended. The crackdown came in the wake of a leadership crisis in Umno and mounting dissent from civil society and opposition parties. It revealed the desperation of the then Mahathir administration, which used the ISA to consolidate power and silence critics.

We remember those who were unjustly detained during that time, including the first Aliran president, Dr Chandra Muzaffar, and Aliran members Theresa Lim Chin Chin and Br Anthony Rogers. We remember the pain and anguish of the families of the detainees. We remember the trips made by many to the Kamunting Detention Centre, where the detainees were subsequently interned.

The use of the ISA by the government for many years punishingly curbed freedom of expression and dissent. It was a total violation of the pillars of democracy and brought untold misery onto the victims and their loved ones. We witnessed the heightened fear of the ISA among the people to the extent that they were incapable of voicing their opinions as a result of self-censorship, which is much more sinister than a direct and overt attack on freedom of expression. Fear under such circumstances took a life of its own.

But we remember and salute the activists and members of the public who steadfastly refused to accept the ISA as an immovable law and its use as a political tool of repression disguised as the need for national security.

We remember too the subsequent years of steady and relentless campaigning (including the various petitions, forums, pamphlets, T-shirts, car stickers, badges, candlelight vigils, the ISA Crackdown Watch and finally the Gerakan Mansuhkan ISA (GMI)). All these efforts over the years eventually saw the ISA being repealed in 2012.

But there still continues to be legislation that allows for detention without trial including the Security Offences (Special Measures) Act 2012, which came into being the same year the ISA was repealed.