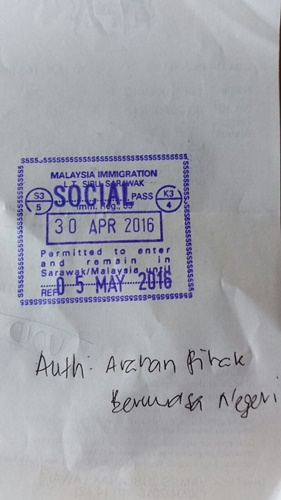 The sad thing about the Sarawak election is that it does not fit into the democratic mode at all.

It is an election that does not give the Opposition any chance to contest on equal footing. It is so unfair that it can be compared to a boxer being thrown into the boxing ring with his hands tied.

Sarawak covers a huge tract of land that is inaccessible without large resources and facilities – a great handicap for the Opposition. A huge team of party workers is required to spread out and reach remote villages to bring to them a party’s point of view on political matters. It takes much effort and time to cover this huge tract of land to win over voters in remote areas.

This makes it doubly hard for opposition parties when they lack resources to penetrate these inaccessible areas to bring home the message of change. This is made even harder by the Barisan Nasional, which takes every step to unfairly put obstacles in their way to deny the opposition parties their legitimate right to campaign effectively.

When leaders of the opposition parties are barred from Sarawak without any reason whereas BN leaders are allowed free access to campaign in Sarawak, one is left baffled as to how lopsided the Sarawak election has become. It is atrociously outrageous.

Going by the same logic, can we then claim that BN leaders from the Peninsula would be controlling Sarawak because these leaders are busily campaigning in Sarawak as well? That would be stupid.

The prime minister and his entire cabinet have descended on Sarawak and are spreading out all over Sarawak using various convenient transportation facilities at their disposal and promising projects and incentives to woo the voters. This is akin to bribing.

When you prevent the opposition leaders from conducting legitimate political activities during the election period by banning them from Sarawak, you are reducing their campaign personnel and their ability to campaign effectively. Thus the Sarawak Opposition is rendered ineffective and their influence is deliberately diminished so that they cannot do well in the election. This is contrary to the rule of law.

Immigration laws allow opposition leaders to enter Sarawak “for the sole purpose of engaging in legitimate political activity”. But when this provision is totally ignored, it means even the rule by law is discarded. There is no rule of law; neither is there rule by law. The Sarawak government under Adenan Satem has no moral authority to exercise any legitimate power to prevent the Opposition equal access to Sarawak.

It is a commonly accepted notion that a caretaker chief minister does not have the power to ban opposition leaders, who have a right to be in Sarawak during this campaign period. He can only attend to the day-to-day affairs and cannot initiate new projects or approve allocations for whatever reason or purpose. But this simple moral obligation has not been observed by the chief minister of Sarawak.

Sarawak voters must never tolerate this blatant abuse of power. If the right of political leaders can be denied so blatantly, it only means that the right of ordinary Sarawakians can also be denied any time after the election.

To safeguard your rights, “Never be a spectator to unfairness or stupidity.”