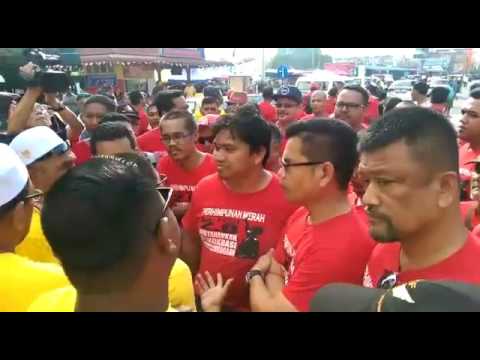 How is it possible for a group of gangsters to roam the streets and wantonly confront peaceful convoys at various places in the country?

They have acted aggressively, violently and appallingly without any consequence. They had taken over certain roads and denied free access to citizens who have a right to use those roads. They have threatened to spill blood and put their lives on the line and yet they have not been restrained.

The head-strong red-shirts leader Jamal Md Yunos, the Sungai Besar Umno division chief, has vowed to bring in 300,000 supporters for a head-on clash with the peaceful Bersih gathering. He had openly declared that he and his men are prepared for any eventuality this Saturday when the Bersih 5 protest march is scheduled to take place, having given the necessary notice to the police for this gathering.

“We are prepared to face anything, not only police action… even put our lives on the line for future generations,” declared Jamal.

It is very obvious that he is spoiling for a street fight.

When a clash occurs on Saturday, can you imagine the savage carnage that is likely to take place?

When his goons acted aggressively and violently against peaceful convoys, it was fortunate that these small groups did not retaliate. But on 19 November, it is going to be a huge gathering of peaceful Bersih supporters consisting of tens of thousands of peaceful citizens.

On this occasion, if some hotheads were to foolishly provoke or stupidly assault some Bersih supporters, it would spark off a tragedy with dire consequences for the nation. God forbid, but when this happens it would be something that would horrify the civilised world.

Yet Jamal is going ahead with his planned confrontation without being taken to task. This can only take place with ostensible backing from powerful forces. Otherwise, how is Jamal going to bring in 300,000 supporters to oppose Bersih? How can he be so exact in the number he was going to mobilise for Saturday without a national mobilisation to serve his purpose.

It is believed that Umno is behind Jamal. Without the backing of Umno, he could not be specific about the number responding to his confrontation with Bersih. Already, there are some indications that Umno members will be taking part.

Umno information chief Annuar Musa said the decision by Umno members to join the red shirts is solely personal and they are not representing the party: “We are not stopping them. Let’s be frank. Most Umno members are not happy with Bersih and some of course want to join the crowd and baju merah.”

Selangor Umno information chief Zein Isma claimed that he was called to join in his personal capacity and that he would also ask those he knows to attend. He confirmed that he and his children would go.

Well, we are reminded of the saying, “There is no smoke without fire.”

But Umno secretary-general Tengku Adnan Tengku Mansor claimed that he had asked the Malacca Umno liaison committee to withdraw its instruction to grassroots members to take part in the red-shirts counter-rally against Bersih 5 this Saturday.

The message that Perak Umno had mobilised 5,000 members to join the rally, with each paid RM50 for food, went viral over WhatsApp.

Tengku Adnan also claimed that the party would not know if its members joined the anti-Bersih rally in their personal capacity. He said the party would also not suggest any disciplinary action against those who insisted on doing so.

It seems odd claiming that Umno members will be attending the red shirts rally in their personal capacity as if they would cease to exist as Umno members during the rally! Whatever flimsy excuse is extended about Umno members’ involvement in the counter-rally, it does not obscure the fact that without reaching out to these members, they will not respond. They have been mobilised by Umno sources; otherwise how can Jamal get his 300,000 people to attend the counter-rally?

In opposing Bersih, the red shirts – and by implication Umno – in fact are saying no to clean government, no to the right to dissent, no to the strengthening of Parliament and no to the empowerment of Sabah and Sarawak, which are the demands of Bersih. This is ridiculous.

The police have not acted in any way to discourage Jamal from going ahead with his hell-bent confrontation.

Inspector General of Police Khalid Abu Bakar, when speaking at a press conference after his keynote address at the Seventh Aseanapol Police Training Cooperation Meeting in Cheras, was quoted as saying, “Of course we are prepared (for possible clashes this Saturday)….”

But the point is, are you prepared to stop the red shirts from going ahead with their confrontation to prevent the clashes? Why allow them to protest on the same day, time and place when this clearly poses a grave danger to the nation?

The inspector general of police also assured, “Whatever we use is to avoid any untoward incidents from happening and whatever we use will be according to the law…”

But then, Mr IGP, if you are in a position to stop any untoward incidents from happening with the participation of the red shirts, why do you allow them to go ahead? If the red shirts are stopped, you don’t need water cannons, tear gas canisters and pepperballs; the last is something new in your arsenal.

We find it difficult to understand why the police are unwilling to be bound by their mandatory authority to stop Jamal’s demonstration on 19 November. Section 18 of the Peaceful Assembly Act 2012 stipulates that the officer in charge of a police district will give an alternative for a counter-assembly to be organised at another time, date or place if the officer finds that the counter-assembly will cause conflict.

Why is this provision not being enforced? Do they want a clash to take place? We are heading towards inevitable danger that will spell doom for our unity and harmony. It is a frightening prospect.

With such tragedy staring at us, Prime Minister Najib Abdul Razak, has maintained an inexplicable indifference to this possible tragedy. He is in a position to stop it with a single sentence. All he has to say is, “Stop it, Jamal!”
Jamal will not defy that order; neither will he disobey the Umno president.

Malaysians are perplexed why nothing is being done to stop Jamal. They are wondering if Jamal is a state-sponsored terrorist.

Tell us, Mr PM: Are the red shirts licensed to run riot?

Malaysians must turn up in their thousands to show the prime minister and Umno leaders that we as citizens will march for our freedom and for a better Malaysia. This is our sacred duty to safeguard future generations. We will not fail them.

Questions are not silly. Red Tshirts dont want corruption to go…dont want Malaysia to be a country with integrity…dont want the gap between the poor and the rich to narrow and allow making the middle class to become poorer. What is the demands of Red TShirts? And why sd tgey choose to be on the same dite of demonstration. I have never seen demonstration of this kind anywhere in the world.

What licenced they are paid