Aliran is concerned over the Penang chief minister’s recent criticism of Teh Yee Cheu, the DAP state assembly member for Tanjung Bungah, for supporting the Umno motion on land reclamation in the state assembly recently, and of the five PKR backbenchers who abstained from the same motion.

Aliran points out that the Westminster parliamentary system, albeit not a worldwide democratic practice, that dictates members of the cabinet or state executive committee must resign if they vote against the government nonetheless respects the right of backbenchers to vote according to their conscience. An example is Jeremy Corbyn, newly elected leader of the UK Labour Party, who voted 533 times against the majority vote by members of his party during his 18 years as a backbencher.

After all, although given the opportunity to contest by their parties, these backbenchers have been elected by the people. Accordingly, they must represent the wishes of the rakyat – not those of the party – and certainly not the wishes of the rich and powerful with vested interests.

It is Aliran’s expectation that the chief minister, who has suffered unfairly for opposing BN government policy, should understand a vote of conscience. As such, Pakatan Harapan state assembly members who do not agree with him should be given the space to voice their differences.

In fact, one of the most attractive things about the opposition Pakatan coalition and of the state governments in Penang and Selangor after G12 in 2008, and G13 in 2013, was that, unlike their BN counterpart, the component parties in Pakatan used to argue their differences publicly. In contrast, in the BN’s case, it was essentially Umno, even a ‘kitchen Umno cabinet’ surrounding the PM, that dictated policy while the other BN parties were marginalised and resorted to complaining in hushed tones that they had no role in much policy making.

Aliran, together with many Malaysians, is committed to a two-party parliamentary democracy where the opposition represents a credible alternative government. When the Pakatan state governments introduced the notion of CAT, calling for competency, accountability, transparency and good governance generally, we strongly welcomed their pledge.

We further supported the Freedom of Information ordinances introduced in Selangor and Penang and the public declaration of assets owned by their state exco members which was never the practice of the BN. We wish that they will push on strenuously with their efforts to bring back local government elections in spite of the legal obstacles and the BN’s opposition to it.

As we said, we wish to usher in a two-party system. And in this regard, we passionately welcomed the call for a change in the federal government. For this reason, Aliran strongly supported the clarion call for “Ini kali-lah” and “Ubah” in 2013.

It is to this end that we want to sincerely see a strong and united DAP within a strong and united Pakatan. But political parties and coalitions cannot progress meaningfully and are likely to split asunder if differences of opinion are not accepted, if leaders become surrounded by yes-men and women, and if leaders make enemies easily without a thought for the future.

We urge the Penang Pakatan government not to be like Umno, which is now harshly acting against leaders and others in the party who have questioned the prime minister over the RM2.6bn ‘donation’, his handling of the 1MDB fiasco, and other allegations.

Instead, we call on the Penang Pakatan Harapan government to bring hope to millions of Malaysians by setting a standard of democratic practice through respecting dissent and votes of conscience both within the party and Pakatan. 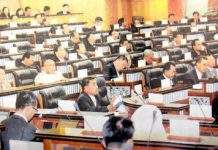 Should YBs be ‘whipped’ to toe the party line?