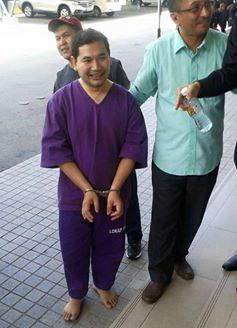 Aliran protests the latest arrests of several elected MPs, state assembly members, other Opposition politicians and civil society activists and the sedition investigations into critics of the administration.

It is clear that these were pre-emptive arrests which were conducted ahead of the #KitaLawan rally in Dataran Merdeka, which was to feature talks by Opposition leaders and other social activists about the GST, 1MDB, the use of the Sedition Act to crack down on the rakyat, etc. And immediately after the rally, PKR reported that its organising secretary Faris Musa, who is also coordinator of Jingga 13, was arrested under the Sedition Act.

The arrests began after Thursday midnight with six people arrested at Dataran Merdeka for a peaceful #KitaLawan sit-in. Rafizi was taken in on Friday afternoon from his service centre in KL while Mat Sabu was detained in Sungai Dua on mainland Penang at 12.20am today. In Sabu’s case, some 10 armed and masked policemen were involved. Tian Chua, for his part, tweeted that 20 police personnel had swooped down on him after he emerged from a town hall meeting at Kg Batu Muda community hall.

Perhaps the most disturbing arrest of all was the reported abduction of Hishamuddin by about six people last night, while he was heading towards the site of the anti-GST rally, part of the KitaLawan programme.

The IGP had stated that the rally today was illegal and that protesters had used violence against a DBKL officer on Thursday night. There are two videos circulating which indicate that the violence was committed by certain non-uniformed individuals against those involved in the peaceful sit-in.

These most recent arrests add to an even longer list of Opposition leaders and critics, even people expressing so-called ‘seditious’ opinions in their speeches, media releases or postings on the internet, including over the social media. They had been detained since the Federal Court ruled that Anwar Ibrahim was guilty in the Sodomy II case.

Among the first arrested were cartoonist Zunar (on 11 February) and PSM secretary general Arutchelvan (on 10 February) for parodying the Court’s decision.

There was also the arrest of Nurul Izzah MP allegedly for sedition on account of her reading out Opposition leader Anwar Ibrahim’s statement in Parliament, notwithstanding the rule of parliamentary privilege. Her arrest was reported globally, and her detention by police was rightly ridiculed far and wide.

And now the IGP has tweeted that former Malaysian Bar president Christopher Leong would be summoned by the police for his allegedly “seditious and misleading” statement on the judiciary.

Just before the #KitaLawan-related arrests, MPs Dr Jeyakumar Devaraj (Sg Siput) and Dr Hatta Ramli (Kuala Krai) and some 80 others were detained for their involvement in an anti-GST rally in front of the Customs complex in Kelana Jaya. Twenty five of them were remanded before being released.

For a more complete list of detentions, see our article ‘Why is the Umno-BN government using the Sedition Act to arrest people now?’

Article 10 of the Federal Constitution grants us the right to express ourselves, to assemble and to associate.

A recent Court of Appeal judgment in Nik Nazmi Nik Ahmad v Public Prosecutor [2014] 4 CLJ 944 unanimously reaffirmed this constitutional liberty as a fundamental right of all Malaysians. Moreover, the prime minister has proudly proclaimed in the United Nations, in Oxford and all over that we are a moderate country and a democracy.

In contradiction to the Federal Constitution, the recent by Court of Appeal judgement and the sentiments expressed by the prime minister himself globally, the police authorities are now resorting to several laws as the bases of these recent arrests.

They include the anachronistic colonial-era Sedition Act 1948 (which the prime minister in 2011 had promised to get rid of); the Peaceful Assembly Act, 2012 (which, ironically, is being used to limit our democratic assembling ); and the Penal Code, which, drafted in the era of Emergency, 1948-60, contains many restrictive clauses.

READ MORE:  Focus on pressing issues instead of going after Steven Gan and Charles Santiago

Worse, there are now plans to introduce a Prevention of Terrorism Act, which will contain undemocratic features including detention without trial.

The police appear rather anxious, even efficient, in detaining these MPs, Aduns, Opposition leaders, activists and critics. In fact, they have violated the recent Court of Appeal ruling which reaffirmed that gathering peacefully is a fundamental right of every Malaysian.

Contrast this with their lack of enthusiasm and slow motion ways in dealing with Ibrahim Ali, who had called for the burning of Bibles. Or their dealing with the cases of Ismail Sabri Yaakob, the Minister for Agriculture and Agro-based Industry, who had called on Malays to boycott all Chinese traders, and of Dr Mashitah Ibrahim, the Minister in the Prime Minister’s department, who had irresponsibly and incorrectly stated in the last Umno general assembly that a Chinese man had burnt pages of the Quran.

No doubt, the statements by these two ministers and Ibrahim Ali had caused some measure of “disharmony, disunity or feelings of hatred or ill will” and/or jeopardised “the maintenance of harmony or unity on grounds of religion”.

But our point is not that the Sedition Act or some other coercive Acts should be used against them. Rather the Sedition Act should be repealed, as the prime minister had promised. On their part, the police must also begin to act efficiently and treat all citizens fairly.

With regards to Dr Mashitah, the authorities had reportedly explained that it was erroneously perceived by the public that she had not been investigated. Although she had not been called into Dang Wangi or some other police station, she had been investigated, they clarified, over the cellphone! Well, if that is the case, all the detainees called in or arrested from their homes should also be given the chance to have interviews or interrogations via cellphone!

Six years on, Teoh Beng Hock has still not been given his due of justice, as a recent demonstration of 30 family members and friends of the deceased outside the MACC office reminded us. It was especially disturbing to read that three MACC officers who were involved in investigations into Teoh’s death had since been promoted! The police could help the MACC to move justice along!

If we had the Independent Police Complaints and Misconduct Comission in place, there would be more respect for the people’s fundamental human rights. These arrests – to deny us our constitutional right to assemble, associate and to express ourselves – might be given closer scrutiny by the authorities. And if arrests were to occur, there might be more transparency involved and no need for abductions as in Hishamuddin’s case or the use of armed police as in Mat Sabu’s case.

Release all these people immediately! Drop all charges, if any! Restore our right to assemble, to associate and to express ourselves in keeping with article 10 of the federal Constitution.

And respect the recent Court of Appeal judgment in Nik Nazmi Nik Ahmad v Public Prosecutor [2014] 4 CLJ 944 that unanimously reaffirmed this constitutional liberty as a fundamental right of all Malaysians.