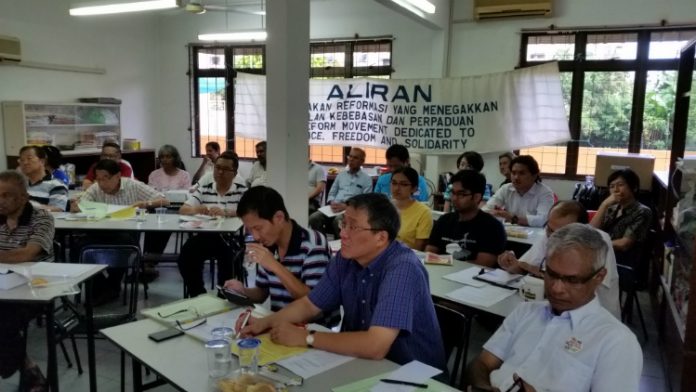 In the unanimous resolution, Aliran members also want coercive laws to be repealed and Anwar Ibrahim to be immediately freed.

Aliran held its 39th AGM today in Penang against a backdrop of a declining economy, political turbulence on both sides of the divide, rampant corruption, the playing up of ethnic and religious differences for political gain and the looming TPPA ratification.

In his keynote address, Aliran president Dr Francis Loh highlighted how this year’s Annual Report does not include special items devoted to discussion of the Aliran Monthly, a magazine that we sustained for 33 years.

Instead it focused on Aliran’s digital outreach through which we continued to play the role of critic and challenge the dominant discourses on political, social and economic developments as espoused by the BN powers-that-be.

He evaluated Aliran’s performance against the major political events that unravelled in the year such as 1MDB, which in turn sparked off Bersih 4, and new rounds of arrests and repression amidst a political fragmentation of the Malay community viz. intra-Umno conflict, the Pas-Amanah split, prominent Malays joining the DAP and the emergence of G25 – all of which must have created confusion for the Perkasa-Isma types who were calling for Malay unity.

One of Aliran’s campaigns was the launching of an on-line petition condemning the Home Ministry’s decision to suspend The Edge which had bravely investigated and reported on the 1MDB financial fiasco. Some 33,000 signatures were collected. Another highlight was the pre-Bersih forum in Penang which helped mobilise Penangites to travel to KL to participate in Bersih 4.

The ‘Crackdown Watch’, an online listing of those probed, arrested or charged under various coercive laws including the Sedition Act, was yet another initiative which serves as a useful reference point for monitoring human rights abuses.

Support the struggle to build a Malaysia based on Justice, Freedom, Solidarity:
READ MORE:  Unsilenced: The freedom to express

Aliran also organised four Young Writers workshops in Penang, Ipoh and KL. The short essays that the youth at these workshops submitted were refreshing in terms of topics chosen and insights.

Before the meeting adjourned, the assembly unanimously passed a wide-ranging resolution (see below) which called upon the government to, among others:

The resolution also called upon state governments, in particular, Pakatan-controlled, to lead by example and comply resolutely to CAT principles and be prepared to listen to criticism and diverse views.

RESOLUTION unanimously passed at the AGM:

In this regard, this 39th Annual General Meeting of Aliran therefore calls upon the government of Malaysia to act upon our demands, which are widely shared by fellow Malaysians.

It further calls upon all Aliran members and other Malaysians to continue the struggle for justice, freedom, solidarity and truth.