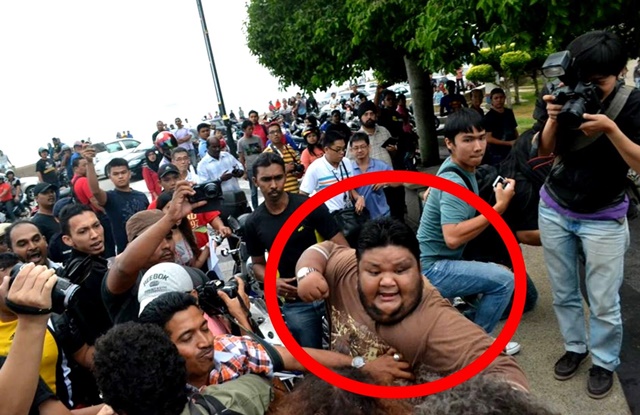 Aliran is appalled at yesterday’s disruption of an anti-Sedition Act gathering at Speakers’ Square in Penang by a group of thugs.

These louts drowned out the event organised by Gerakan Mansuhkan Akta Hasutan calling for the repeal of the Sedition Act, by shouting obscenities, heckling and creating a ruckus. Activists and supporters of the GHAH were forced to leave the Esplanade as their safety was not assured.

The aggressive and threatening behaviour witnessed at Speakers Square is a shocking demonstration of a trend of growing intolerance and fascist behaviour. Incidents such as this make a mockery of one of the objectives of Vision 2020, which is to establish a mature, liberal and tolerant society. Where is the moderate Malaysia the prime minister spoke about earlier this month at the 69th United Nations General Assembly in New York?

An outsider would be forgiven for thinking that that the rowdies owned the public space at Speakers Square and are able to dictate who can and cannot speak there. But the fact is that Speakers Square is a public space designated in May 2010 by the Penang state government as a place to practise and celebrate freedom of speech. The space belongs to the people of Penang and no group can deny any other the right to speak there.

The police, some of whom were in plainclothes, were present at this incident and were meant to ensure public order. But by not intervening early to separate the groups and allocating time for each group to speak, they allowed an escalation of violent behaviour by the pro-Sedition Act group resulting in the anti-Sedition Act activists being severely threatened and denied the space to speak – all because they held a different view. Both groups may have had opposing views but they each have a right to their views and the right to express those views.

This was not the first time that thugs have disrupted a peaceful function at the Speakers Corner. They had been a public nuisance previously and got off scot-free. On one occasion, one of the rowdies even threw a shoe at the Chief Minister’s car.

Shouldn’t the police, knowing all this, have taken precautionary action to pre-empt such unruly behaviour? If only they had nabbed some of the rowdies and charged them for being a public nuisance, this would not have happened.

Freedom of speech is not the freedom to prevent other people from speaking. In a democracy, it is imperative that the police are trained to manage groups with opposing views to ensure that the right to freedom of expression and of speech in public spaces – what more, Speakers’ Square – is upheld.

Aliran condemns the disruption of the peaceful gathering of GHAH activists and supporters and reiterates the demand for the immediate repeal of the Sedition Act .