MIRI: Save Sarawak’s Rivers Network (SAVE Rivers) together with the Baram Protection Committee (BPAC) totally disagrees with the statement made by Sarawak’s Chief Minister Abdul Taib Mahmud (published in the Borneo Post today) that the “dam is vital for Baram’s future”.

“The Chief Minister is right in saying that the Baram Dam is vital for the future of Baram, but the future he is painting looks very bleak as far as the people of Baram is concerned,” said Philip Jau, Chairman of BPAC.

“I can safely say that the reality on the ground is most of the people in Baram do not want the dam as they have seen and heard about the hardships and the unresolved problems that the people of Batang Ai and Bakun faced,” added Philip.

“Even in Murum, the Penans affected by the Murum Dam are not happy with the way the government is treating them. How can Taib say that the people of Murum are okay?” questions Philip.

Chairman of SAVE Rivers Peter Kallang refutes Taib’s statement that Baram is half empty and it needs the dam to attract people who had migrated to towns to come back.

“Taib should ask himself why Baram is empty,” said Peter.

“Baram still lacks the basic infrastructures for it to progress and most of its natural resources such as timber and land have been exploited without much (being) given back to the locals and that is why people in Baram migrated elsewhere to look for a better living,” explained Peter.

Peter went on to explain that in the Sungai Asap Resettlement Scheme, the unemployment rate is quite high.

“Half of the people resettled in Sungai Asap have left to look for better jobs elsewhere.

“For the other half that stayed, half of that have gone back to their original lands or (are) living on jelatongs (floating houses).

“Most of the lands surrounding Sungai Asap are leased out to timber and plantation companies, making it more difficult for the people there to farm and earn a decent living”, said Peter.

SAVE Rivers and BPAC concurred that Taib seems to be out of touch with the feelings and sentiments of the people on the ground, as some community leaders and elected representatives are giving false information that all the people in Baram agree to the Baram Dam project.

SAVE Rivers and BPAC suggest that Taib should make a surprise visit to Sungai Asap as well as the Penans living in Murum and the communities that are going to be affected by Baram Dam to get a first-hand feel of the real situation on the ground instead of saying that everything is all right and people are happy with the dam projects. 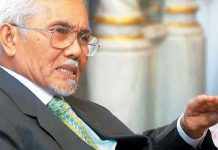 What they – BN/PBB give to entice voters is the tax-payers’ money! Day in, day out, deceiving & fooling the people. What about the billions that went missing? What about MACC’s investigation of Sarawak’s Taib, 31 years in power with all resources, contracts, activities under his thumb? They only care about staying in power at the expense of the Rakyat, at the people’s poverty & misery. Crooked, rotten, shameless, despicable. Vote them out! Am writing from a truly transparent and democratic country, NZ.

One of the most sickening, despicable regimes in the world. State-controlled media, deceiving the people, rigging elections, gerrymandering. Stole, mismanaged and losing hundreds of billions of RM$. The Twin Towers remains half empty, Dayabumi is infested with drug-addicts. Apartheid: Petronas – (mostly) Malay. (Public) Universities out of reach for (many) Chinese & Indians causing brain drain & financial outflow. What happened to Scorpene’s Mongolian murder? (Sudden death) of Teoh B H over an alleged few thousand RM$ on his wedding day? Death of Boyert – Taib fomer aide? What happened to MACC’s investigation of Taib’s 31 yrs in power, holding 3 supreme portfolios of Chief Ministr, Finance Ministr & Planning & Resources Ministr & profiteering from every aspect of Sarawak’s economy. Concessions & contracts awarded without tenders….the list is endless. Shame on you BN, UMNO, PBB. God’s nemesis will deal with you, just watch.

Sports Champion Pandelela should ask Mr CM Taib:” (How did) Bruno (vanish) after he came all the way from Switzerland to help natives against your destruction of forest?… You are Chief Ministr, Finance Ministr & Planning & Resources Ministr for 31 years and yr Uncle some 20 yrs before you. You control all aspects of economic activities from timber to shipping to land development to hydro; contracts awarded without tender, your cronies live in palaces while there’s no decent trunk road from Sematan to Limbang, while natives lack electricity and drinking water. How much have you, yr Uncle and cronies taken from Sarawak? Foreign analysts estimated not less than RM25billion = RM25,000 million. Your daughter in law’s divorce claim alone is RM400mil. Have you not indirectly or directly destroyed Sarawak? Foreigners in bersih, democratic countries like NZ … are shocked you have the cheek to still show your face.”

… Taib has run out of areas to bleed from and therefore he is now turning to the dam for as his next source for money. People of Sarawak wake up, regardless of what he has got to say or whatever promises he is making it is just ‘vote catching’ especially before the GE.
You have been fooled long enough and stop believing in him, like the saying goes, if you can believe in what he says, … can also be eaten by you. You can bet on your hard earn ringgit he and his family will disappear the very next day his fates are determined when the votes are counted in the coming GE. Good riddance to … old man !