In an article entitled “Inconclusive Findings” in the Eastern Times of 16 September 2009, James Ritchie wrote:

The special committee comprised mainly women federal officers from Kuala Lumpur and a few locals because they wanted to have a truly independent report.

To which one can only respond: the likes of James Ritchie are amongst those who give journalists and journalism a bad name.

Why, for instance, did James Ritchie choose to describe John Fery James, actually, John Fery Jame, as “a Penan geologist working with Petronas” when he knows only too well that John Fery, at the material time in question, was working in the Miri Resident’s Office, and only moved to Petronas some time earlier this year? Indeed, in the report, John Fery is identified as such.

Having covered up John Fery’s real place of work at the time in question, James Ritchie then chooses to hide the fact that Penan millionaire, Datuk Hasan Sui, was also a member of the committee, as were officers from the JPN sited in Sarawak, the Biro Wanita Sarawak, etc.

Now unless they were absent from the proceedings or could not follow a word of what was going on, these representatives from Sarawak, including Datuk Hasan Sui, apparently concurred with the report.

To assist him, we translate: the committee “unanimously concludes as follows: (i)…that the alleged sexual molestation of Penan women and female children by outsiders with dealings with them, including workers from logging companies and traders, did definitely occur”.

“Unanimous”, “sebulat suara” admits of no ambiguity: it simply means, in any dictionary, that all those present concurred in the findings.

There is nothing “inconclusive” about this statement. It speaks volumes of the likes of James Ritchie that he should find such a statement “inconclusive”.

Now, will the National Union of Journalists see fit to discipline one of their own?

Finally, the rag for which the likes of James Ritchie writes, the Eastern Times, was born in the aftermath of the proscribing of the Sarawak Tribune for printing some cartoons. It appears that the Eastern Times is itself a cartoon of a “newspaper”! 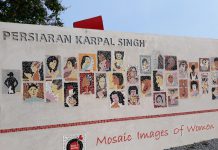 Journalism without fear or favour

James Ritchie is ‘Taib’s …”..a political press secretary..working to beef up Taib’s image.What he wrote may not be balance and fair but sway to his … Master.I am surprised to hear that and it’s unbecoming of him to write such an article but maybe as his master’s request. Sad sad sad sad..