The excessive reaction resorted to by Utusan Malaysia and other Malay-based groups over the fair criticism made by AirAsia X chief executive Azran Osman Rani is disturbing and worrying.

Azran had criticised what he rightly considered to be a racial slur in the daily’s post-general election coverage.

Utusan Malaysia columnist ‘Awang Selamat’ even threatened that the daily would not hesitate to punish AirAsia by not accepting the budget airlines’ advertisements.

Such a knee-jerk reaction sadly reveals an alarming inability and incapacity – displayed by the daily and other quarters concerned – to accept and appreciate the legitimacy of differing opinions and dissent in a democracy. Such behaviour suggests that there’s only one way of looking at things in Malaysia, and that is a perspective that necessarily aligns itself with that of Utusan Malaysia and its political masters – which must be denounced as bunkum.

Equally disconcerting is that this issue erroneously suggests that a Malay individual who holds an opinion that runs counter to that of the Malay daily and its political owners, i.e. Umno Baru, is regarded as having betrayed his/her own ethnic community.

Umno Baru, it must be said, doesn’t have a monopoly over truth nor does it necessarily represent the interests and ideals of all members of the larger Malay community. The same rule applies to all political parties who wrongly claim to champion their respective ethnic communities.

The refusal to acknowledge, let alone appreciate, the importance of differing views in a democracy is not only confined to this rabid daily.

Just recently the newly-anointed Home Minister chastised detractors of the Barisan Nasional for disputing the results of the recently concluded general election, and unwisely told them to leave the country if they were unhappy over what had happened in the polls. This is tantamount to equating legitimate dissent with treachery – now, this is outrageous and undemocratic, and doesn’t promote any sense of inclusivity and tolerance among Malaysians from all walks of life.

If there is a lesson to be learned from this episode, it is that just as Utusan Malaysia has the freedom to deny advertising space to AirAsia, discerning and concerned Malaysians also have the same freedom and right to boycott and abandon this controversial and race-baiting political mouthpiece. 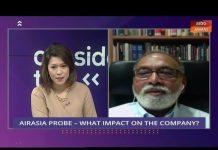 I will fly AirAsia…as for Utusan I am allergic to it. I ve not touched read the paper for the past 20 years.

azran, because of you I will fly Airasia-X