Like many of their dutiful journalists in the mainstream media, some government ministers have shown through their recent antics and expressions that this is indeed the season to be silly. They display a kind of behaviour and thinking that can easily earn not only a name in Malaysia's Book of Records but also the gleeful attention of the rest of the world.

One such case involves the indefatigable Zainuddin Maidin. A Reuters report has it that the Information Minister was fuming over a BBC interview with former deputy premier Anwar Ibrahim. It appears that Zam, as he's fondly referred to in the journalistic fraternity, was baffled over why the BBC would give “air time to failed opposition leaders”.

So troubled by this incident was he that he reportedly lodged a protest with BBC World Service editors during his visit to London. Not only that, Zam complained that interviews such as this could damage diplomatic relations between Britain and Malaysia as it “did not accord respect to the democratic decisions of the Malaysian people in their rejection of the opposition political parties”.

While he's still on his London visit, Zam should also learn a thing or two about how democracy works outside Malaysia. For one, opposition leaders, failed or otherwise, have a legitimate standing in a democracy and therefore deserve equal and fair access to the media. The BBC, despite its political constraints, does attempt to provide a platform of sorts for both government and opposition leaders in and outside of Britain.

Two, the BBC, unlike the pliant RTM, is somewhat independent of the British government. So it would be useful for Zam to appreciate this fine distinction, especially given that he was a journalist. Thus, to say that a BBC interview can harm diplomatic relations between the two countries does not hold water.

It needs to be added here that it's not so much that Anwar is supposedly a failed politician as the fact that he may be a potent force in the Ijok by-election. Like some so-called commentators of the mainstream press, Zam appears desperate enough to do almost anything to put the Opposition in a negative light and to ensure a BN victory. 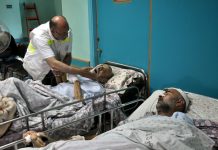 While its hospitals are bombed, Gaza is relegated as news

A short walk in KL

TV cleansing to a fault