Think about this for a moment. Israel is called Israel in BBC reports. But Palestine is rarely called Palestine. Israel fights Hamas. Israel has a name, the name of a place, a country. Palestine has none. Instead, Hamas – or, the more usual, Hamas militants – are fighting Israel. Never do we hear of the Palestinians or the Palestinian people, observes John Hilley.

When Israel is pounding Palestinian infrastructure in Gaza, one of the standard ways of reporting it is to say things like: “a Hamas-linked police station”, or “a Hamas-run hospital” was attacked. The inference being clear: if even a civic building has some connection to Hamas officials, it becomes a legitimate target.

This is coupled with the consistent media assertion, following the same Israeli message, that Israel is fighting Hamas, not the Palestinians.

It may seem a semantic point. And it is – a very important one. The constant repetition of ‘Hamas’ rather than ‘Palestinians’ robs the latter of their nominal statehood, their character as a community locked together, resisting and responding as a people, NOT a party.

Imagine if the BBC said something like: ‘New Labour (rather than Britain) is sending additional forces to fight in Iraq or Afghanistan.’ That, at least, would be more accurate. But it would be regarded as preposterous by the BBC. Even wars that were never supported by the vast majority of British people cannot be termed anything other than ‘British’ engagement.

Support the struggle to build a Malaysia based on Justice, Freedom, Solidarity:
READ MORE:  Israeli aggression in Jerusalem must stop

Why, by the same token, should Israel’s offensive not be called ‘Kadima’s bombing and invasion’? Of course, it has the support of Likud and other parties. So, why not term it something like the ‘Kadima-Likud war alliance’? Of course, one might object that their actions enjoy the support of most Israelis. Which, as opinion polls indicate, is certainly true. Yet, the actions of the Palestinians in resisting Kadima-Likud aggression is similarly solid. So, why is this described as Hamas action?

The distortion is evident in almost every mainstream media report. References to Israel attacking Hamas, rather than Palestine or the Palestinians, are used almost as a matter of course by journalists. It’s an accepted normalisation of media language. And it informs even the supposedly more analytical output of ‘critical’ reporters like Jeremy Bowen.

Take this piece from Bowen in which he considers the relative fighting capacities of Israel and Hamas, noting how Israel is seeking to avenge itself, reputationally, from the beating it received from Hezbollah in 2006:

“Other factors are at work though. The Israeli army wants to lay the ghost of what is widely seen in Israel as its failure during the Lebanon war of 2006.”

This may be worth noting. But is it really that important a factor besides the much more immediate task of containing and crushing Gaza itself? The more particular Israeli aim here is not just to beat Hamas – as constantly reiterated by the BBC. It’s to break the spirit of and, ultimately, annihilate Palestinians.

Hezbollah are then compared and contrasted with Hamas, the implication, again, being that these are both fanatical, non-state, outfits fighting a sovereign country, Israel. Thus, according to Bowen:

Again, it’s as if this is about competing military performances – rather than the desperate efforts of a people and its elected government trying its best to resist Israel’s barbaric siege.

Such reportage serves to de-personalise the suffering of Palestinians. Alongside the more brazenly-stated and unopposed context that Israel is only acting in self defence (“Israel’s justification for what it is doing is the need to protect its citizens in Sderot and the other towns within rocket range of the Gaza Strip.”), this low-lying subtext has a more subliminal impact, serving to instill notions of Palestinians as some kind of vague other; a disparate entity being managed by a coherent, identifiable, sovereign force. It has the suggestive effect of saying: Israel is strong, ordered and under threat, therefore Israelis have much to lose, while Hamas is weak, disordered and a menacing threat, thus, the Palestinians can lose even more without too much concern.

“For the last 18 months Israel and its allies have agreed to continue isolating Hamas and to allow only the most basic essentials into Gaza. It was a policy which reflected their total rejection of Hamas’s ideology and actions. It was easier to stick to that policy than to make serious attempt to address the problems of Gaza, the Palestinians and Israel. ”

Yet, this all feels like token, secondary reflection on what might have been, rather than clear, primary explanation as to why the siege was imposed and the manipulative ways in which Israel has used the ‘Hamas threat’ to intensify it.

This kind of ‘mitigation’ often encourages the benign interpretation that journalists like Bowen are really ‘balanced’ and ‘objective’ – that, as Bowen has repeatedly claimed, of late, “the BBC cannot take sides”. In fact, such output is, arguably, even more deceiving than the openly biased Fox News variety. For it merely secretes all the same falsehoods about Hamas and Israel’s ‘defensive’ project in its loaded language and subtext bias.

Rather than the BBC’s fixation, and reporting of Israel’s ‘grievance’, with Hamas, Bowen and his peers might more usefully consult Jonathan Cook’s account of how Israel is using Gaza and the West Bank as “laboratories” of repression. Imagine seeing that kind of analysis in a BBC report. 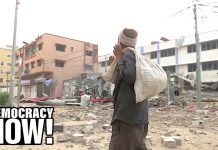