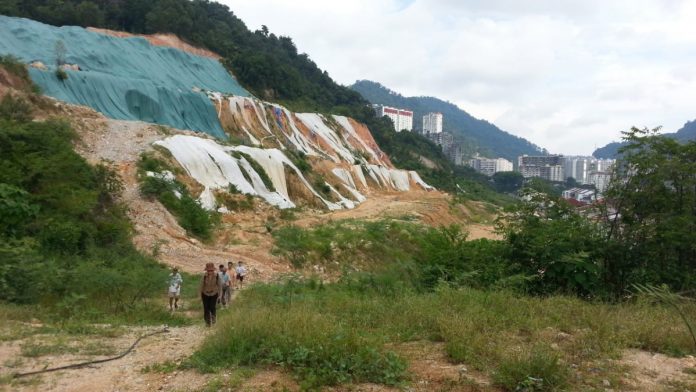 Without a local plan, the ambiguity over what kinds of development are permissible on the hill lands persists, observes Penang Forum.

Development of hill land under the Penang Structure Plan

Over the last few years there has been a spate of high-density, high-rise building development projects on Penang Island, encroaching into the fringes of hill land, which is gazetted under the Penang Structure Plan (2007-2020) as land above 250 ft (76m) above sea level. Development is also prohibited on land with gradient exceeding 25 degrees.

The consequences of the lack of a gazetted local plan

The Penang Local Plan is meant to follow the policy and guidelines of the Structure Plan and should specify in detail the types of development that are permissible in specific areas of the State. The local plan was approved by MPPP in 2008 but it has not been made public nor gazetted to date.

Without a local plan, the ambiguity over what kinds of development are permissible on the hill lands persists.

Consequently, the increase in approved high-rise development and indiscriminate cutting of steep hill slopes is causing serious environmental and safety problems that are faced by various resident communities.

Of the many examples that are evident in many parts of Penang Island, the most glaring is encountered in Paya Terubong, where a development company has been given conversion approval for high-density development comprising one 41-storey and three 47-storey tower blocks whereas its original project was for three-storey townhouse development.

Despite the affected residents in the surrounding housing areas registering their strong objection to MBPP and holding a press conference with the Paya Terubong Adun on 1 November 2015, the MBPP gave approval to the developer for the conversion to high-density high-rise development in December 2015.

READ MORE:  Top-up women-only additional seats: What, why, how?

Environmental and safety impacts of hill development in Paya Terubong

Initial earthworks at a massive scale had already caused a host of environmental and safety problems to residents in the immediate vicinity.

While a stop-work order is presently in force, there is little evidence of proper mitigation measures taken to make good the environmental damage on the cleared land.

The Bukit Gelugor MP was also invited to make a site visit to witness the consequences of these massive earthworks as well as the dismal track record of the same developer in constructing the twin towers of the Pine Residence in the vicinity with scant regard for the safety of surrounding residents.

What is to be done in Paya Terubong

The Taman Seri Rambai/Lau Geok Swee Residents Association demands tougher actions to be taken by the authorities (while awaiting the decision of the Appeals Board) to safeguard their welfare in the face of the impending development by:

Development in other parts of Penang

The Bukit Kukus case in Paya Terubong is only one of many more development projects approved on sensitive hill land. Between 2008 and 2015, the MPPP granted 56 approvals on land above 250 ft, many of which are high-rise, high-density projects. Residents in several other areas are facing similar issues.

Penang Forum views with great concern these issues and senses a general public perception that development is being carried out without proper planning spelt out in a local plan. Developers take advantage of the lack of detailed local plans and are taking liberties in flaunting site operations and building guidelines in the face of weak control and monitoring.

Penang Forum is convinced that there are real opportunities for the Penang state government to redress these shortcomings and therefore recommends that: