The speed with which it was approved raises serious questions about the transparency of the DOE approval process, says Penang Forum.

Penang Forum is shocked to learn that the Department of Environment in Putrajaya (DOE) has approved the Detail Environmental Impact Assessment (DEIA) report for the Seri Tanjung Pinang Phase 2 (STP2) development in Penang.

This project will involve reclamation of 760 acres of the sea in the north east coast of Penang island to form a man-made island which will be about 85 per cent the size of Pulau Jerejak. It will be the biggest reclamation project in Malaysia

In the public review of the DEIA report, the last day for public submission of feedback and objections was 14 March 2014. The DOE approval letter was dated 10 April 2014. All this in less than four weeks for a project of such magnitude and of significant impact to Penang and Penangites. The DOE has given new meaning to the term ‘fast track’.

Penang Forum, other NGOs and concerned Penangites submitted feedback and objections to the DOE. None of the objectors receive any acknowlegement or response. The DEIA process requires the project initiator and consultants to respond to all written comments from the public within 45 days.

The objectors raised many pertinent questions on the validity of the findings of the DEIA consultants. Flawed and questionable assumptions were used to underestimate and overvalue the proposed project.

For example, the price of shrimps was assumed to be US$200/tonne (RM0.70 per kg.) in the projected loss to the fishermen when the current market price of shrimps is about a hundred times that assumed.

In the traffic impact assessment, the public transport mode share was optimistically assumed to be 40 per cent when the current mode share is only about 3 per cent.

Were the comments and feedback submitted by the public reviewed and considered – as not a single point raised was taken in the approval letter?

This raises serious questions about the transparency of the DOE approval process and we want answers to the questions raised.

In the best interest for the people of Penang, Penang Forum calls on the Penang state government to address the issues and questions raised by NGOs and concerned Penangites.

We call on the state government to do due dilligence on this where the federal DOE in Putrajaya has failed to do so.

The DEIA report cannot be accepted as it is. 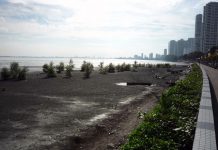