The Penang state government’s plan to reclaim “island A”, the first part of the Penang South Reclamation mega-project, seems like a fait accompli.

But how did we get here? Following the progress of the “Penang Transport Master Plan” (PTMP) might show that a sweet promise made to the public for a self-financing project has been used to sell a questionable privatisation-cum-marketisation deal.

In early 2013, the Penang state government approved a RM27bn Penang transport masterplan to address the state’s transport and traffic problems.

Two years later, the SRS Consortium proposed an amended “PTMP”, which ballooned the costs to RM46bn. The proposal included the reclamation of three islands spanning 4,500 acres off the southern shores of Penang Island to finance the PTMP.

SRS was appointed as the “project delivery partner” to manage this massive project, charging a fee equivalent to 6% of total project cost. SRS sold this Penang Southern Reclamation proposal to the Penang state government as self-financed, ie the proceeds of land sales will pay for the PTMP projects.

According to the SRS request for proposal (Volume 1, Chapter 4), reclamation of islands A and B, taking about eight years, will net an income of RM16.1bn for the Penang state government (RM7.2bn from island A and RM8.9bn from island B).

Volume 1 page 1-06 of the same proposal states, the PTMP project, “Does NOT require the State (or the Federal Government) to raise or guarantee any loans to finance the delivery of the TMP (Transport Master Plan).” The emphasis “NOT” in capital letters is original.

All funding, except the initial capital, is supposed to come from reclamation of the three islands. SRS promised to source an initial RM1.3bn bridge loan to kickstart the reclamation.

By right, the Penang state government should have rescinded its agreement with SRS as the latter could not fulfil its basic commitment, something which Penang Forum consistently advocated.

Eight years later, the people of Penang are sold a different story.

On 25 March 2021, Penang Chief Minister Chow Kon Yeow revealed that island A, the largest island to be reclaimed, will become “private”. This is because the Penang state government was unable to secure a loan or financial support from the federal government to jump start the mega-project.

Under the new public-private arrangement, a 30:70 joint venture called the “project developer” would be set up – 30% owned by a Penang state government nominee and 70% by SRS. The project developer has exclusive rights to develop and sell the reclaimed land on island A.

The project developer would award all construction work (not through open tender) to a “turnkey contractor”, another 30:70 joint venture between a Penang state government nominee and SRS, to manage and implement the project.

The turnkey contractor would directly award the reclamation work to Gamuda Engineering and other work packages (infrastructure work, phase 2A of the Pan Island Link highway and phase two of the reclamation of island A) through competitive bidding.

Upon completion, island A would be handed over to the project developer, which would hold a tender for the sale of land parcels.

This new scheme puts Gamuda in the driver’s seat as it owns 70% of the joint venture through SRS. Gamuda will be responsible for financing the project, and the Penang state government will be absolved from all financing responsibility and risks.

The project developer will have full control over the reclamation schedule — reclaiming and selling according to market conditions, stipulating the condition that the work should be completed within 10 years of commencement. (It is expected the reclamation will take up to six years with initial land sales beginning from the fourth year.)

This means the original intention of financing PTMP projects based on land sales is no longer applicable, for the link between land sales and PTMP project construction has been broken. Land reclamation and sales will now be driven purely by market conditions, not by PTMP projects.

According to the chief minister, the Penang state government does not have to fork out a sen, and it will still own all the reclaimed land.

This deal sounds too good to be true. So, what will the Penang state government get out of this new arrangement? The short answer is RM600m in seven to 10 years’ time. It is even less (over RM400m) if calculated on a net present value basis.

Let us follow the arithmetic of this new deal. According to Gamuda’s new estimates, land sale proceeds from the first phase of island A will generate RM8-9bn over seven years, reclamation will cost RM4-4.5bn, and infrastructure construction will cost between RM2-2.5bn. (The reclamation and infrastructure costs have more than doubled compared to the SRS proposal in 2015.)

If the Penang state government gets only RM600m from this new deal, what will Gamuda stand to gain?

Plenty. It has a complete monopoly over all reclamation work. All proceeds from land sales will be used to pay for all the project developer’s and turnkey contractor’s costs and liabilities, including but not limited to payment to the turnkey contractor, payment of interests and loan principal, and all fees and taxes.

In other words, Gamuda will be “double-dipping”, by making a good profit from the reclamation work and, on top of that, chalking up 70% of net proceeds of the project developer and the turnkey contractor.

The original idea and intention of the Penang South Reclamation project was to fund the RM46bn PTMP. The initial estimated costs of phase one of the Pan Island Link highway and the elevated light rail line (the first two PTMP projects) came up to about RM6 billion each. These costs have ballooned to about RM8 billion each.

Penang Forum is in principle against this highway and the elevated light rail because these mega-projects are over-designed for local population needs, too costly and entail unacceptable environmental impacts. However, for this essay, there is a need to analyse whether the Penang South Reclamation will deliver what the government promised.

Is the Penang state government admitting that the light rail and the Pan Island Link highway will not start until they are able to generate money from reclaimed land sales in seven to 10 years’ time? Even then, how is a projected revenue of RM600m million from Island A going to pay for the light rail and the highway, which will cost RM8bn each?

What can we conclude from all the twists and turns in the agreements between the Penang state government and SRS/Gamuda?

Financing a bloated PTMP was put forward as the original justification for the Penang South Reclamation project.

But it is now clear this has failed. It is impossible to finance even the two initial projects of the PTMP (the light rail and the highway) with RM600m.

The PTMP and the Penang South Reclamation have been decoupled. Perhaps the PTMP was simply a bait for the people of Penang, which is now switched for the original intention of land reclamation for land sales and nothing further.

Faced with the ongoing pandemic, the economic forecast for the next 10 years is uncertain. What happens if the cashflow falters before land sales can begin? Will island A end up like so many other stalled reclamations?

The Penang state government is willing to gamble away the state’s fortunes given unforeseeable externalities that will have to be borne by future generations.

In this whole process, Penang loses its environment, valuable fishing ground, food security and fishermen’s livelihoods. SRS’ consultant in its environment impact assessment admitted that the Penang South Reclamation project will cause “irreversible change” to the environment and a “permanent loss” of physical and biological resources in the seas of southern Penang island.

This new arrangement clearly does not make any economic, financial and ecological sense. It is against all public interests and a folly to continue it. 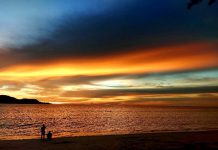 Oh no, another bridge and more reclamation in Penang!