Penang Forum has repeatedly called for the cancellation of the Penang South Reclamation, and we are heartened to hear a chorus of voices in support.

Penang Forum is a broad coalition of NGOs working towards local democracy and sustainable development in Penang. While we may be concerned about many social and environmental issues at the national level, our focus is on improving policies, governance and public participation in Penang itself.

Responding to the global call for climate action, Penang Forum initiated a project in 2009 to promote public transport and reduce the need for private vehicle use. The Penang transport masterplan was a willing collaboration between the Penang state government and civil society, and there is a mountain of documents to show for it.

The state then changed the plan to one that includes an elevated light rail line, monorail lines and many highways, which are not cost-efficient while requiring massive hill cutting and land acquisition.

We tried for the next few years to convince the Penang government to opt for a more integrated plan featuring “Better, Cheaper, Faster” transport alternatives, but to no avail.

In 2015, the Penang South Reclamation (PSR) was introduced as a means of financing the high-budgeted transport plan. In the final agreement with the developers, “the means” – land reclamation – has become “the ends” unto itself. The primary justification for land reclamation is no longer the Penang transport masterplan (PTMP) but industrial expansion for the first phase of 1,200 acres.

Although it is steamrolling all objections, the Penang state government has yet to answer Lim Mah Hui’s three easy questions, which we repeat here:

1. Can the state justify its population projection for the three islands to reach 446,000 by 2030 as stated in the EIA report?

2. Can the state explain how it will fund PTMP projects, which will cost billions, when its expected revenue from reclaiming half of Island A would probably be about RM600m in seven to 10 years’ time?

The economic risks of this massive reclamation are enormous, but the environmental risks are even more shocking. Reclaiming the three islands measuring 4,500 acres (1821ha) would involve the dumping of about 190 million cubic metres of sand into the sea.

If this is hard for ordinary folks to visualise, the Consumers Association of Penang and Sahabat Alam Malaysia have likened it to dumping 76,000 Olympic-size swimming pools’ worth of material. The scientist Kam Suan Pheng says it is equivalent to the total volume of earth from the hills of Penang Island, if they were to be scraped down to a depth of one metre.

Note that they will deposit this infill not into a barren wasteland, but into Penang’s best fisheries and prawn-catching area, an environmentally sensitive area with coral reefs, turtle landing sites and a playground for dolphins.

Even with all the expensive eco-engineering, the residual impacts of large-scale reclamation like the lamentable loss of fisheries, the ruining of beaches and mudflats, severe coastal erosion and sedimentation will be problems that will not go away.

The Penang South Reclamation is expected to generate 3.2 million tonnes of carbon annually (the 18-point advice circular, Malaysian Physical Planning Council, 2019). Just to offset these carbon emissions, Penang would need a mind-boggling 147 million mature trees (based on 21.8kg of carbon sequestered per tree).

In addition, this mega-reclamation project will require sand to be mined from 819.7 sq km of seabed, probably in Perak waters. This will devastate fisheries, reduce marine biodiversity, destroy the benthic zone and dislodge carbon-sequestering marine sediments from the seabed, causing ocean acidification.

The three artificial islands will be vulnerable to rising sea levels in the coming decades. When this was pointed out, the developers offered to raise the height of the reclaimed islands – but this will require even more marine sand to be mined from an even larger area of seabed, generating even more carbon.

Out of the 1,200 acres in the first phase of reclamation, 700 acres will be allocated to a “Green Tech Park” targeted at “high-value” electronics and electrical industry players. It is claimed that the Penang South Reclamation project will create RM70bn in foreign direct investments and 300,000 jobs worth RM100bn over the next 30 years.

Our leaders like to think that this project will replicate and continue the success of the Bayan Lepas free industrial zone, which expanded onto reclaimed land in the 1980s.

But this is a false assumption based on comparisons that conveniently ignore the historical evolution of this industrial zone and Penang’s place in the constantly changing global industrial ecosystem.

The manufacturing sector is already well established in Seberang Perai, where there is room for further expansion and consolidation of an industrial corridor from Batu Kawan to the Kulim Hi-tech Park.

Conditions for Penang’s next-level industrial success will not depend on developable land alone – which is still in adequate supply in mainland Penang – but on Penang’s ability to draw and keep human talent.

Penang will fail to capture human talent if the state insists on putting all its eggs in the fake-island baskets rather than nurturing a well-planned and diversified economy.

“Reimagine, Recreate, Restore” is the theme of World Environment Day on 5 June 2021, witnessing the launch of the UN Decade on Ecosystem Restoration.

Penang leaders can rise to the occasion by addressing the longstanding problems of our scarred hills, scattered landfills of toxic and plastic waste along eroded coastlines, famously polluted rivers and vulnerability to recurrent flooding, as well as excessive levels of marine pollution in the Penang channel and north of the island.

World Oceans Day on 8 June focuses on “The Ocean: Life and Livelihoods”. The ocean supports fishing livelihoods and communities, as well as food industries downstream, so that Penang people can enjoy fresh seafood at affordable prices.

Instead of playing divide-and-rule with the fishermen and dumping sand into their “rice bowl”, the state should be empowering these fishermen as traditional custodians of the fisheries commons as well as supporting local community wellbeing and resilience.

During this Covid pandemic, many people are latching on to the Penang South Reclamation’s unsubstantiated promise of creating jobs. During the initial four years, if not more, foreign workers involved in construction and dredging operations will take up most of the designated jobs in this projects – assuredly benefiting the operators of the foreign workers’ hostel in the vicinity, but with questionable impacts on the local fishing communities.

However, if the state were to fulfil its Penang 2030 promise of developing Seberang Perai by locating industrial expansion there, the Penang state government can achieve a win-win-win situation – creating tens of thousands of new jobs in construction, manufacturing and service industries, while retaining the livelihoods of the Teluk Kumbar fishermen, safeguarding Penang’s food security and conserving the healthy biodiversity of our coastal ecosystem.

Instead of climate action, the Penang government and their developer partners have expended all possible efforts towards green marketing for this reclamation project: for example, organising an international masterplan design competition with the winning entry ironically themed “BiodiverCity”, and taking out paid advertorials in newspapers extolling the supposedly green principles of this mega-reclamation project.

The state also boasts about its plan for the Penang South Reclamation to incorporate some renewable energy, water recycling, fancy architecture and decent landscaping. But would this be enough to make this project green and sustainable? Or is the project’s bright green packaging rather hollow, shallow, and a gross misrepresentation of its ecological balance sheet?

The Penang chief minister is in favour of banning drinking straws because it contributes to marine litter. He reportedly said: “This policy by the government is for Penang and Mother Earth”.

Yet, he is pushing this “green” and “sustainable” mega-reclamation, which in fact involves nothing less than a deliberately and carefully planned, blatant, wholesale ecocide.

Enough of this doublespeak. It is not cool to try to pull the wool over the public’s eyes about something as calamitous as large-scale reclamation. It is not instructive to the younger generation, who are tired of adult hypocrisy and fearful of their future.

Greenwashing on such a grand scale is just a shameless smokescreen for a private-led development which will ultimately bring hugely harmful climate and environmental impacts on Penang and the planet.

We appeal to the federal government to revoke the approval of the environmental impact assessment and cancel the Penang Southern Reclamation project. – Penang Forum 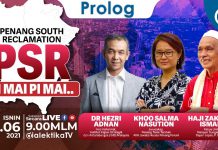