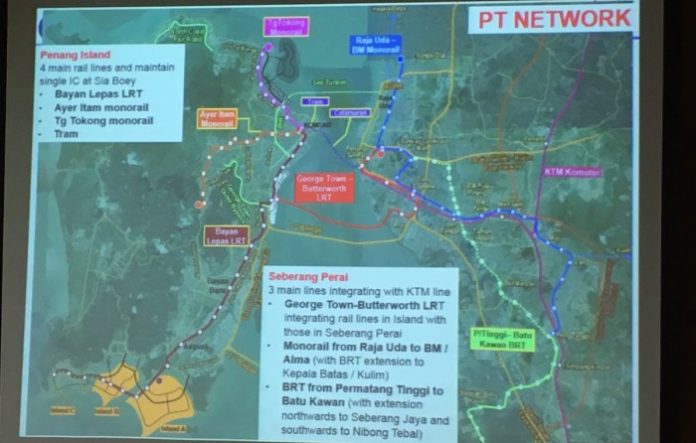 The “Penang Transport Master Plan” proposed by SRS Consortium has clearly failed in more ways than one.

In 2015, the Penang state government announced that SRS Consortium was selected through a so-called “request for proposals” as “project delivery partner” or consultants to implement the transport blueprint designed by the original consultants, Halcrow.

SRS came up with a bloated 20-volume proposal that bumped up Halcrow’s estimate for the infrastructure cost from RM27bn to RM46bn under the SRS proposal. The proposal radically departed from the Halcrow blueprint by introducing expensive, unsustainable and regressive transport infrastructure such as mega-highways, elevated light rail on unsightly pillars, and outdated monorail systems.

Many analysts back then believed that this bloated cost was to justify 4,500 acres of massive land reclamation that SRS was also proposing, with the blessing of the state.

The plan clearly did not promote sustainable mobility for the entire state. A big part of the problem is that the three partners in the consortium – the contractor Gamuda 60% and two Penang-based property developers – had little experience in drawing up and implementing a sustainable mobility plan.

Civil society representatives from Penang Forum also repeatedly warned at Penang Transport Council meetings of a conflict of interest if consultants for the project were to later become contractors for the project. After all, how could consultants propose a plan that they would very likely profit from as contractors?

And so it has come to pass. The ‘project delivery partner’ model has now been dropped [for the reclamation of Island A], and SRS Consortium and Gamuda have emerged as contractors in the reclamation of part of Island A – that too, without an open tender. This conflict of interest alone raises many eyebrows.

All pretence that the PTMP is mainly about transport infrastructure has been dropped. Now many can clearly see that it is motivated by land reclamation – as the critics had pointed out from the start.

The original financial model too has failed. Under the SRS proposal, Islands A and B totalling 3,700 acres were supposed to finance the first phase of the PTMP, ie the elevated light rail from Komtar to Penang airport and phase one of the Pan Island Link totalling 19.5km. Work on these projects was supposed to have started in 2017 and completed by 2022.

But now, the piecemeal reclamation of Island A will not be enough to pay for that first phase – not that those regressive mega-projects were the solution for traffic congestion in Penang. The piecemeal reclamation will finance a 2.4km stretch (out of the 19.5km Pan Island Link Phase 1) in Bayan Baru and a 5.3km highway viaduct (Phase 2A) linking Penang Island to Island A for the next several years.

Building more roads and highways is hardly a progressive idea when the world is desperately trying to reduce carbon emissions to stave off climate change. How will this provide sustainable mobility for the entire state of Penang in the near future?

Even this piecemeal reclamation of Island A should not be allowed, given that it destroys major fishing waters, which are vital for food security in the state. The fisher community has consistently opposed the reclamation and has mounted a legal challenge against the approval of the environmental impact assessment. The appeal is scheduled to be heard in June, and the Penang government should not ride roughshod over observing due process.

A revised environmental impact assessment was submitted in January, presumably to reflect the piecemeal reclamation. This should be made public to seek feedback, given the controversial reclamation and the environmental sensitivities.

The notion that we need this reclaimed land to drive the economy of the state is misguided. The excessive centralisation of large industries brings with it its own problems. Large companies require cheap land and tax incentives. Thousands of workers have to be either housed nearby or transported over longer distances, adding to congestion and the need for more highways.

Small and medium-sized enterprises (SMEs) form a significant part of the economy of the state. The state has many vacant two and three-storey industrial buildings located all over which new SMEs could use to provide jobs and multiplier effects for surrounding communities. This sector should be encouraged instead of focusing mainly on large capital-intensive set-ups.

If we had stuck to the original Halcrow transport blueprint, we could have made great strides in introducing bus rapid transit and modern trams or even trackless trams by now, and even expanded water-based transport.

The Penang public has been let down by the greed of the project proponents.

The inherent conflict of interest of consultants acting as contractors (and project developers) that we had warned about should set alarm bells ringing.

Covid-19 should make us rethink our priorities. The failed SRS “PTMP” and massive land reclamation should be dumped, and all agreements with SRS Consortium should be terminated.

The Penang state government should instead get a team of internationally recognised independent experts to design a genuine sustainable mobility plan that puts people and the ecosystem first.