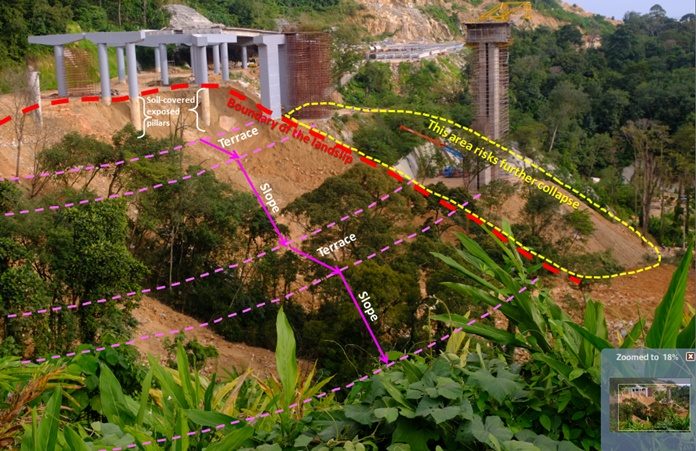 It is with great sadness that Penang Forum is issuing this press statement about the Bukit Kukus landslide tragedy.

On Friday, 19 October 2018 innocent lives were lost, workers who had left their homes and families to make a living in our country, to build our roads under dangerous conditions.

Shame on us if we care any less because they are not Malaysians. Shame on politicians who were quick to blame the rain and ‘inadequate’ laws and showed little to no remorse when so much could have been done to prevent this tragic loss of lives.

Over the last few days, the entire nation has read and heard shocking revelations about the authorities’ appalling lack of ability to enforce existing laws and monitor construction sites.

A few highly alarming issues must be highlighted:

1. This is a Penang Island City Council (MBPP) project. Responsibility lies squarely and fully on its shoulders. Will it hold an independent and transparent commission of inquiry? Hard questions must be asked. Was there an environmental impact assessment for the project? Were the conditions followed? Were the safety guidelines of the state and MBPP followed? Who are the consultant engineers and were they doing their job?

2. As mentioned in the press, laws requiring soil erosion mitigation work were not enforced and mitigation was not carried out by the contractors on this MBPP project. This includes the overflowing stream

3. Just a week before the landslide, a stop-work order was issued on 13 October 2018 following a massive ‘site mishap’ – which saw 11 concrete columns, each measuring 25 metres long, fall from the very same elevated highway construction. Yet work continued undetected till the Department of Occupational Safety and Health called in on the contractor on 17 October. Work only ceased because of rain on the morning of the 19 October. The collapse occurred that very afternoon.

According to the press, the contractor said, “I was confused by the order.” He also claimed the dead and missing workers were not his. After the first mishap, did the authorities make a concerted action to ensure the safety of the site?

4. Penang Forum and Penang Hills Watch had alerted the authorities twice through written reports of their analysis and urged for caution on the hill slope of the construction site at Bukit Kukus. Did the authorities investigate and instruct the contractor to take precautionary measures?

5. A year ago on 21 November 2017, after the tragic loss of 11 lives due to the hillside collapse at the Granito development site, MBPP was asked to ensure the safety of the construction at Bukit Kukus. The former mayor in a site visit declared Bukit Kukus was “safe”. Among the additional safety measures insisted upon was building check dams, covering slopes with geotextile layers and increasing maintenance of the retention pond to remove sludge, by the hour if necessary. Were these measures ever put in place? Did MBPP monitor its own project?

6. Asking for new laws with higher fines, at this time, is clearly an attempt at distracting attention from the issue at hand. Are the authorities saying these workers died because we didn’t have enough laws? Did the authorities fail to implement and enforce the laws that we already have?

7. The authorities should now urgently focus on restoring damaged hill slopes and solving flooding issues. All development approvals have to take in account global warming. They cannot say yes to hillside development and then blame the weather when a tragedy happens.

Penang Forum is not engaging in a we-told-you-so exercise, as misconstrued by the press. This would be absolutely counter-productive. Let us instead look at what Hong Kong did to rectify a poor record of construction site monitoring after a series of horrendous landslides. The Hong Kong government set up a special Geotechnical Department in 1978 and staffed it with more than 200 professionals to carry out strict land risk management.

In 2014 the Penang state government made an official visit to learn from them. MBPP then set up its own Geotechnical Consultancy Unit which is supposed to monitor all hillside developments. Was it adequately staffed? What was done or not done, and could the Granito and Bukit Kukus tragedies have been prevented?

Until we have the capacity to manage hill land projects responsibly, professionally and adequately, the Penang government owes the people of Penang, at the very minimum, the following:

Firstly, a moratorium on all ongoing hill land development, whether public or private sector projects, and a total ban on those which have not started.

Secondly, a total review of the three paired roads (under the Zenith package) and the Pan-Island Link with its highly dangerous tunnelling though fragile hills, massive use of explosives, precariously situated elevated sections with pylons and pillars, and most of all, its proximity to densely populated areas.

An immediate introduction of traffic reduction strategies is necessary to obviate the need for more roads in hill areas.

Issues of professional and statutory liability of not only private parties but also government bodies, must be determined. If there was negligence, the culprits must be charged. The endless pushing away of responsibility and blame must end with someone or else it will be business as usual after the dust settles.

The people of Penang has to shoulder some responsibility for this because they have almost given absolute power to the current state government. With the absence of respectable opposition the state govt has become more arrogant and shows little respect to the plea of ngo’s and penangites. At least in the next election elect a strong opposition to keep the state govt in check.

wow, suddenly penang forum so concern about the plight of foreign worker, since when…few days ago?…LOL

My take: It is going to be business as usual. That is the state of a nation that has an attitude defeciet.

This is so terrible. Informed twice ler..are They called repentative? “Remorse “ and still repeat the same mistakes??😬😬