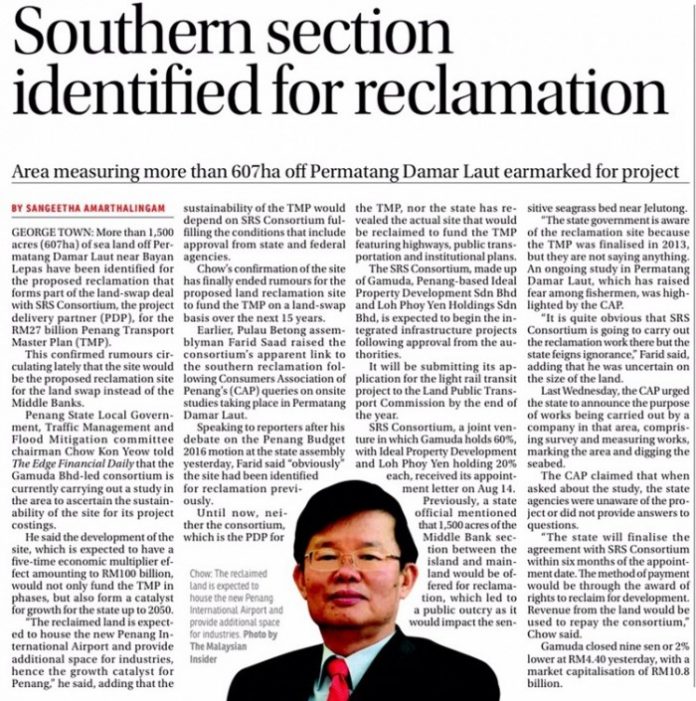 If we dismiss the motion on land reclamation just because of it was Umno that put it forward in the state assembly, we risk throwing out the call for participatory decision-making as well, says Penang Forum.

A controversy is raging over the recent Umno motion in the Penang State Assembly on reclamation policies and practices in Penang. This issue has generated much heat for a number of reasons.

First, the issue of massive land reclamation is of great public interest because it alters forever the landscape of Penang island with serious environmental, economic and social consequences.

Hence the public has every right not only to know what is happening but also to participate meaningfully in such decisions that affect their lives; and the State has every obligation to provide accurate and full information and to make the process as transparent as possible. This is the true meaning of participatory democracy that we expect from the Pakatan government which promises change.

Second, the message – there are two parts to the Umno motion. The first calls for public hearings (pendengaran awam) before any reclamation projects are finalised; and the second calls for a postponement of all NEW reclamation projects until detailed oceanic, environmental and social impact studies are done, and to cancel all such development if they have a negative impact.

In fact, the term public hearing goes well beyond public feedback that is already required in preparing an environmental report. It suggests engaging with the wider public (not just people in the vicinity of a project who are directly affected) to solicit and take account of their input before undertaking major public projects. Hence, on the surface, there is nothing wrong with these two motions. The devil is in the details, the interpretation (e.g., does new include existing?), and the implementation (these issues will be taken up in a subsequent media statement).

Third, the messenger – it is unfortunate that it was the opposition party Umno that raised the issue as it was part of the former Barisan National state government, which was complicit and responsible for starting unsustainable policies on land reclamation, including granting legally questionable freehold status to reclaimed land. Our hope is that there is now a genuine realisation that the state must stop such bad governance.

The fourth issue generating controversy is political loyalty. The chief minister is visibly unhappy that some members of his government voted in favour of or abstained from the Umno motion, branding this incident as a mutiny.

We should be mature enough to distinguish between the message and the messenger. In a functioning democracy, which the Pakatan government aspires to, there are issues that cut across party lines – such as upholding good governance and sustainable and equitable development.

The Pakatan parties have been courting Barisan politicians to support their call to eliminate corruption and the Najib government. It is double standards that when some of their members chose to support or abstain from the Umno motion, they were criticised and punished.

This incident is significant because some politicians were able to put aside, at least temporarily, their differences and acted on the basis of their conscience. As Steven Sim, a young DAP politician, recently wrote, we should hope for a new type of politics in Malaysia, where politicians do not toe the party line like robots but instead can choose to vote and act according to principles based on what is right and best for the public. One should be able to distinguish between public and party interests. He calls such politics “dynamic coalition-making” based on principles rather than the present “fixed coalition” politics based on party interests. He also says that Malaysian voters are educated enough now to expect that.

For these reasons, whatever our reservations about the messenger, we should support the message for more public hearings and participation on important issues like land reclamation and hill development and the right of politicians to make decisions on the basis of what is best for the public.

* Part 2 of the statement follows in the next couple of days.

A great day for People Power in Malaysia!