Reclamation is a two-edge sword. While it brings the state revenue, there are irreversible environmental and social costs when done excessively, says the Penang Forum steering committee.

The chief minister of Penang recently used the accident on the first Penang bridge to justify his proposed RM27bn transport masterplan. This is disingenuous; it is like arguing that more highways are needed because of traffic jams caused by accidents on the North-South highway.

We express grave concern over several issues regarding the current proposed transport masterplan.

The overriding motto of the transport masterplan is “moving people not cars”; yet the rhetoric does not match the facts. Of the estimated RM27bn, and possibly even higher than RM30bn budget, the lion’s share, about RM17bn, goes to building more roads for cars than building public transport. The priority should be reversed: 70% of the budget should be for public transport and 30% for roads.

For example, instead of building a tunnel to accommodate cars, why is there no effort to explore converting two lanes on either the first or the second Penang bridge for trains or LRT. This will cut down the budget considerably. Or in the worst case, if a separate tunnel is needed, it should be for trains and not for cars.

The vision put forth by the state is an old paradigm that does not work because it addresses only the supply side and not the demand side of the transport equation. It looks at only increasing the supply of roads, i.e. building more roads and tunnels for private vehicles. It ignores a basic tenet of transport planning, i.e., building more roads simply creates more demand for their usage.

Unless the state is willing to also initiate necessary, though initially unpopular, measures to regulate the demand for private road usage through road pricing, higher parking charges and car pooling, it will end up like Bangkok and KL with a sphagetti of highways that are clogged.

We do not see these measures in the transport masterplan vision. Instead, the chief minister has said before that he considers such measures as undemocratic.

There are a lot of low-hanging fruit that should have been picked but have not in tackling traffic jams. These are much less expensive and will slash massive costs. Many of these have been identified in the Halcrow masterplan. Some examples are better enforcement against illegal parking and illegal hawking on streets, better management of on-street parking charges and the clearing of five-foot ways for pedestrians.

These will go a long way to cut down traffic jams. But there seems to be no political will to implement them. Instead, the reaction is to go for mega and expensive projects.

The financial model of the transport masterplan begs many questions. It is totally dependent on the state selling land reclamation rights to private developers to pay for the mega projects.

Reclamation is a two-edge sword. While it brings the state revenue, there are irreversible environmental and social costs when done excessively. Hence, it should be minimised rather than maximised. (The present model opts for the latter.) One is reminded of the proverb to not kill the goose that lays the golden egg.

Another way of reducing the costs – and hence the scale of reclamation – is to rethink the financial model of providing the use of highways free of charge. This is unsustainable both financially and ecologically.

Instead, if users want to enjoy the privilege and convenience of driving on roads, rather than taking public transport when these are provided, they should pay for the service. These charges can go to subsidise more public transport if the State is serious about pro-poor policies.

People are not against paying tolls. They are against it when the concessions are unjustly awarded and one-sided. This government can show the way to managing tolled roads correctly.

A fundamental flaw of the proposed masterplan is the assumption on which the projected transport demand is based. The population projection in the masterplan till 2030 is over 500,000 people more than that given by the Department of Statistics of Malaysia.

Hence, is there an over-projection of the demand for the use of roads and even the type of public transport mode proposed? For example should not trams that are less costly be prioritised over monorails?

Is there financial modelling for the running and management of each of the public transport modes? Who owns them? Who is financially responsible for running them? What happens if there are losses?

Transport planning must follow or at least be coordinated with overall planning for the state. It cannot be done independently of the Penang Structure Plan, which is in the process of being reviewed.

The above are only some of the many issues that must be properly and rationally studied. Meantime we should not politicise the issue and appeal to populism for support for the transport masterplan. Neither should masterplan be dictated by pure commercial interest. 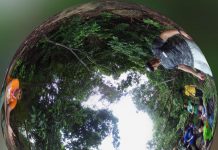 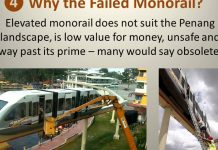 I wonder if the people of Penang Forum cycle to work or send their kids to school on a bicycle?

An accident on the Penang ‘fridge’? Cool.