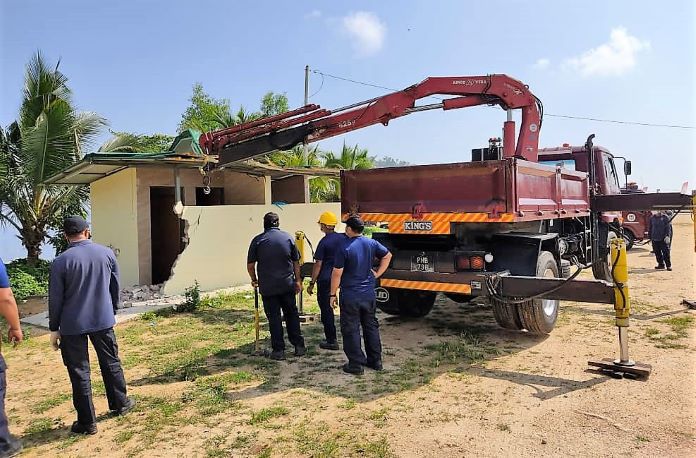 Both these lots are on the northern ridge line of Bukit Kukus, now infamously referred to as “Iconic Hill”.

This council’s enforcement action to destroy the illegal structures on the top of the flattened hill is a step in the right direction to deter further clearing on the hill. It serves as a timely reminder that no one is above the law and landowners cannot engage in brazen and wanton destruction of hill land even if they own it. Syabas (congrats), city council!

It is regrettable that certain quarters of the public have viewed this enforcement action as a destruction of “public facilities”.

The public must realise the context in which the council’s enforcement action has been taken, which is to destroy illegally built structures on an illegally cleared plot of land.

There should be zero tolerance for any sort of destruction of hill land – even if facilities are built, because none of these can replace the ecological services that forested or tree-covered hill land provides. For example, when forested hills are denuded, it removes the protection against hill slope erosion and surface run-off, which contributes to flash floods.

While the road up to the ridge top may have become a popular hiking spot now, the flattened hill top is a sore testament to the degradation of hill land in Penang.

While Penang Forum is pleased by the council’s enforcement action, it also comes a little too late. Google Earth imagery shows that the clearing was noticeable as early as 2014 and steadily expanded over subsequent years.

Penang Hills Watch, an initiative started by Penang Forum to keep watch over the hills of Penang, reported this case to the city council in 2018. At that time, the clearing at the site was smaller and none of the illegal structures was present.

We received a response from the council stating that this was a case of “earthworks without approval”.

Much media attention was also drawn to this case in 2020, when the clearing of the hill intensified.

If stern enforcement action had been taken earlier, with coordination between the various other relevant agencies, the immense environmental damage that has been inflicted on the hill could have been avoided.

We applaud the city council for this enforcement action but would also urge it to step up vigilance and enforcement action on all hill sites across Penang Island to prevent the wholesale destruction of hill land by irresponsible parties.

We also urge the council to take strong legal action against the owner for illegal clearing of land and to stop it from such further work. – Penang Forum