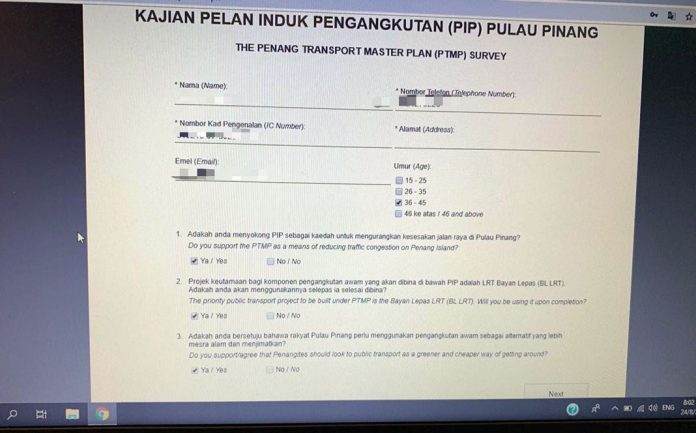 Penang Forum is alarmed that the Penang government could claim that 97% of close to 3,000 respondents had indicated support for the proposed elevated light rail system (LRT) going by the responses to a questionnaire at several booths around the state.

Many of those who have seen the questionnaire are aware it contains three laughably ludicrous and leading questions. These questions trick people into answering that they support the project based on one-sided “facts” provided by officers at the various booths.

Most respondents – and the public at large – have not been shown the pros and cons of the LRT without bias – nor have they been made aware of better, cheaper, quicker alternatives.

Instead, they are offered biased “facts” by personnel at the various display booths.

Let’s look at the three questions in the questionnaire:

Question 1: ‘Do you support the PTMP as a means of reducing traffic congestion in Penang Island?’

Does “PTMP” refer to the cheaper Halcrow plan, which put forward bus rapid transit, ferries and modern trams, which would be largely elevated or segregated from traffic except in the heritage area?

Or the bloated RM50bn SRS proposal, which came up with expensive options that would require massive land reclamation to finance it, while jeopardising our fisheries and putting state finances in a precarious position?

And what about mainland Penang? Has it been forgotten for the next five to 10 years?

Question 2: ‘The priority public transport to be built under PTMP is the Bayan Lepas LRT. Will you be using it upon completion?’

The question also fails to mention the SRS plan for a RM9bn Pan Island Link from the north to the south of the island. Wouldn’t many respondents prefer to drive along this new expensive highway (for the few years before it gets congested) instead of taking the fixed Komtar-to-Bayan Lepas LRT route?

The question fails to mention that the cost of the LRT has been rising to a staggering “more than RM10bn” now. Now, RM10bn would have been enough to put in decent public transport across the entire state including mainland Penang (under the Halcrow plan) – but respondents are not aware of this alternative.

There is also no mention in this question about the bloated projected LRT ridership figure (originally 42 million per year or 115,000 daily in an island with about 700,000 residents) put up under the SRS plan, which critics have panned. The ridership has since been reduced to 29.5 million per year (or 81,000 daily) – but only by 2038.

The public display booths do not show any financial projections to the public. Instead, only technical details of the construction are shown.

Are respondents aware of the financial implications if this LRT ridership figure is not met? Where will the Penang state government find the money if ticket sales are unable to cover operational and maintenance costs of about RM170m a year? Will quit rent and assessment rates then be hiked again? The public is in the dark about this.

The public has also never been shown what data have been used to conclude that the LRT and its alignment is the right choice for Penang.

Without all this information, respondents would be unable to provide an informed answer. This question preys on public ignorance of these all-important details.

Question 3 – ‘Do you support/agree that Penangites should look at public transport as a greener and cheaper way of getting around?’

This is a blindingly obvious question which hoodwinks Penangites into associating the extravagant PTMP as “a greener, cheaper way of getting around”. But the reality is that other more affordable and efficient options can be built more quickly at a fraction of the cost.

The question does not mention other more affordable alternatives – an efficient bus system, modern trams and autonomous rail rapid transit (ART) are available.

This LRT questionnaire is reminiscent of all those top-down largely one-way “consultation sessions” with the fishermen and “public briefings” on the “PTMP”. At those sessions, ordinary people were not provided with real alternatives to the bloated RM50bn SRS transport proposal, which entails massive ecologically damaging land reclamation to finance it.

Will the government next say that the LRT survey shows that 97% of the people support the three-island reclamation scheme since it is supposed to finance the LRT?

Can somebody do a physical audit to measure exactly how come the LRT Stations including the MRT are not disabled and wheelchair safe and friendly.