Anti-ISA protesters in London were surprised when Malaysian Foreign Minister Anifah Aman walked up to engage with them. Sydney Sassoon reveals what transpired in their conversation.

The Abolish ISA Movement held a protest against the Internal Security Act outside the Malaysian High Commission in London on Sunday, 8 August 2010. The protest was timed to coincide with a visit by Malaysian Foreign Minister, Anifah Aman, who was in town to hold bilateral talks with UK Foreign Secretary, William Hague.

Civil society activists saw this as an opportunity to send a wake-up call to the Malaysian government to clean up its human rights record and end its clamp down on civil liberties. Last week, the Malaysian government barred a number of peaceful candlelight vigils from proceeding in various locations throughout Malaysia and arrested 38 people. Observers claim the police were heavy handed, in one instance chasing civilians into a nearby shopping mall where they arrested six women for ‘being rude and telling the police off’. The candlelight vigils were being held to mark the 50th anniversary of the enactment of the Internal Security Act (ISA), a law that allows for indefinite detention without trial.

The government maintains that the ISA is needed to counter terrorist threats. Critics, however, point out that since its inception, more than 10,000 people have been detained including civil society activists, opposition politicians, journalists, bloggers, academics and those suspected of offences related to immigration and passport fraud.

Malaysia was re-elected to the United Nations Human Right’s Council in June this year. A few weeks later, the UN working group on arbitrary detention completed a visit to Malaysia and called on the Malaysian government to repeal the ISA and three other laws that allow for administrative detention. The UN working group also found that a large proportion of ISA detainees were subjected to cruel and degrading treatment amounting to torture. Many had hoped that the UN working group’s findings would finally pressure the Malaysian government into undertaking a serious review of the ISA, as promised by Malaysian Premier Najib Razak when he took office 16 months ago. To date, such a review has yet to materialise.

In London on Sunday, around 30 peaceful demonstrators erected a symbolic ‘mausoleum’ to the ISA, in full view of Malaysian embassy officials and visitors entering the Malaysian High Commission in Belgrave Square to attend a talk by the Foreign Minister.

One demonstrator dressed in an ISA detainee’s uniform and stood on a platform, with candles and white roses scattered around a plaque that read ‘ISA 1960-2010, Kills human rights and civil liberties’. Other demonstrators carried placards bearing the messages ‘Stop Detention without trial’, ’50 years is long enough’, ‘Yes to Freedom, no to torture’, ‘Kami tidak takut – Mansuhkan ISA’, ‘50+ tahun merdeka, tapi belum bebas lagi’ ,‘End torture and abuse in Malaysia’ and ‘ISA haram di sisi agama Islam’. Demonstrators also symbolically burned a copy of the ISA in an act of defiance at the way such draconian legislation has been used to stifle legitimate dissent.

Ninety minutes into the peaceful but emotionally charged demonstration, the Foreign Minister crossed the road with his entourage to address the demonstrators. He appeared willing to engage with the group and agreed that the Internal Security Act had been abused by the government in the past and that “the use of torture was completely unacceptable.” He stated that he was “amongst a handful of cabinet ministers who had been vocal on issues regarding the abuse of the ISA, particularly during my time as political back-bencher.”

He stressed that a review of the ISA was needed but refused to set out a clear timeline or concrete plans for when and how this review would take place. He also made it clear that a full repeal of the ISA was off the cards. When asked why this issue had been continuously stalled from entering the realm of parliamentary debate, he gave the excuse that the delay was in order to ensure that “the government gets this right” and “a proper consultation takes place”.

This could not help but have the effect of making some in the crowd feel that this was just more lip service in a government chain that has failed to show a strong commitment or clear political will to repeal an act that so many sections of society feel is unjust and counter-current to building a democratic, open and civilised society.

A further issue that had spurred many Malaysians to attend the London symbolic vigil were the blatant double standards experienced by candlelight vigil attendees in Malaysia the week before. The Foreign Minister was asked why it was that Malaysians could feel safe speaking their minds and taking civil society action in the UK, but were not free or safe to do so back on home soil.

The Minister seemed slightly at a loss for a moment before finally answering that as he had been travelling extensively recently he was not completely up-to-date with the events surrounding last weeks crackdown, but that he himself “remained in favour of free speech, having been a student activist during my university days in the UK”. At this point however, the Foreign Minister couldn’t seem to make his mind up as to whether or not he thought Malaysia being compared to the UK was a good thing.

One demonstrator highlighted that Malaysia needed to allow freedom of speech, assembly and peaceful protest if it was to be prevented from spiralling towards a police state, like that of Zimbabwe.

Anifah appeared annoyed at this and said, “Why is Malaysia being continually compared to countries like Zimbabwe and not the UK or US?”

When the demonstrator then pointed out that in the UK and US, freedom of speech and assembly are considered basic civil liberties, and the police help facilitate peaceful protests rather than obstruct with intimidation tactics and unlawful arrests, he countered by stating that “the US had their own repressive detention laws and facilities such as Guantanamo Bay”.

The crowd interjected however with the argument that indefinite arbitrary detention and torture were universally wrong, whether these incidents occurred in Guantanamo Bay or Kamunting, and were not an excuse for Malaysia to shirk its own human rights responsibilities.

Following a twenty minute discussion, the demonstrators closed by thanking Anifah for his efforts at open engagement but asked that a clear message be taken back to the Malaysian Prime Minister and his government; that as Malaysia gains international recognition and prominence on the world stage – this recognition must be for the right reasons.

As one demonstrator put it, “The Malaysian government needs to prove to the world that it respects human rights, is committed to upholding civil liberties and the rule of law and will conduct itself in a just and transparent manner. This commitment and its execution must be consistent and authentic, be it on UK, Malaysian, US or Zimbabwean soil. Najib Razak’s government can make history, and it can do so by repealing the Internal Security Act – which will surely gain it much respect and favour in the eyes of its citizens and the wider international community.” 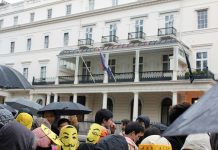 The speech that wasn’t delivered