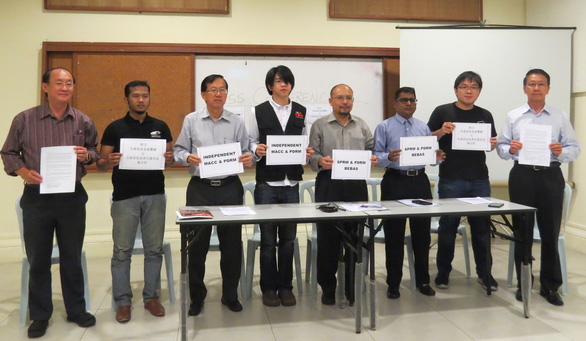 A group of 37 NGOs today released a press statement calling on the government to restore public confidence in the Malaysian Ant-Corruption Commission and the police.

A press conference which was attended by the representatives of eight of the NGOs was held at the Kuala Lumpur and Selangor Chinese Assembly Hall at 11am.

Zaid Kamaruddin, the chair of Gabungan Bertindak Malaysia (GBM) and deputy president of Pertubuhan Ikram Malaysia, read out the statement during the press conference. He stressed the importance of the police and the authorities maintaining public trust and confidence and hoped that it would not come to a situation described by the Malay proverb “harapkan pegar, pegar makan padi”.

Tarmizi Anuwar of the Centre to Combat Cronyism and Corruption (C4) stated that the police and the MACC are two vital law enforcement agencies in the country, and no outside influence should interfere with their duties.

Dobby Chew of Suaram stated that Suaram felt that, on the issue of abuse by law enforcement agencies, the officers involved and the supervising officers must be held responsible.

Tan Yew Sing, the vice chair of GBM and vice chair of Merdeka University Berhad, mentioned that the demand to establish an Independent Police Complaints and Misconduct Commission is nothing new and has been a consistent demand of civil society for years. But in the last few years, the situation has been deteriorated and this indicates the urgency for such a commission to be established.

Other NGOs representatives at the press conference were Dasan Saminathan from Mipas, Stanley Yong Yew Wei from the Kuala Lumpur and Selangor Chinese Assembly Hall, Jeffrey Phang from Friends of Kota Damansara and Ryan Chua from Pusat Komas.

We, the undersigned, are very concerned by the allegations that the Malaysian Anti-Corruption Commission (MACC) is being pressured by the Prime Minister’s Office to drop its investigation on possible police misdeeds in the form of a protection racket for criminals.

It is alleged that this misdeed implicates senior police officials across several states. These allegations can seriously undermine not only the public trust in the police as an institution of public security but also the credibility of the government as a whole.

We call upon the MACC to continue its investigations on alleged police links with criminal figures without fear and favour. They must, if such criminal activities in the police are proven to be true, bring these culprits to justice and help the police to restore public confidence thereby removing a stain to its honour.

We also call upon the Prime Minister’s Office to publically answer these allegations as to whether it has used its influence to dissuade the MACC from carrying out its investigation into the police. In addition, the Prime Minister’s Office must publically state that it will not interfere nor impede the latter’s investigation into the police.

It is only by taking such a public stance that the Prime Minister’s Office can restore public confidence that the government is committed to the rule of law together with transparency and accountability which make up good governance.

The MACC must remain as an independent unit that will operate without influence from any quarters especially from government departments, government officials or political personalities.

We also called upon the government to set up the Independent Police Complaints and Misconduct Commission to ensure that the police force remains free of criminal elements and abuse of power. Failure to address those allegations and to put in proper checks and balances into the police force will erode public confidence in this venerable institution which has served Malaysia so well.

We call upon the government to take the above steps as soon as possible so that the MACC can carry out its duties and resolve any doubts that the public might have about the police and the government’s commitment to good governance in the country.

Time for MACC to be supervised by EIAC