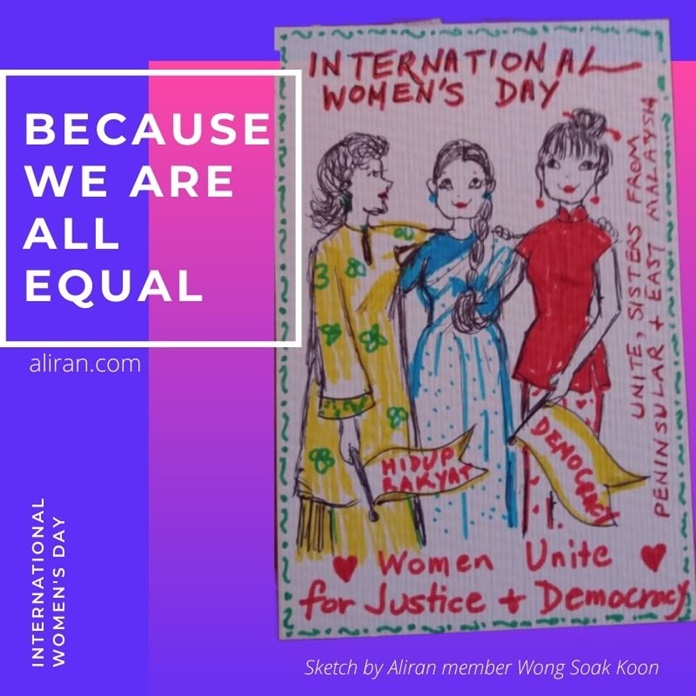 This is a day to commemorate women’s struggle for change and to celebrate the progress. It is celebrated every year on 8 March.

The theme for the 2020 celebration, as declared by the United Nations, is “I am Generation Equality: Realising Women’s Rights” while the campaign theme is #EachforEqual, a call to all individuals to contribute towards an equal world.

The celebration of International Women’s Day this year takes place amidst the political instability and abrupt change of power. This inevitably affects the day-to-day running of the government.

The change of government and the postponement of the parliamentary sitting from March to May also means that the tabling of the Sexual Harassment Bill, originally planned to be tabled in Parliament in March, would be delayed.

It is in our understanding that substantial effort and consultation had been done in drafting the bill. As such, we hope the government will push through with the effort and table it in Parliament as soon as possible.

In the last election both incumbent ruling and opposition coalitions, Barisan Nasional and Pakatan Harapan, outlined specific focuses on women in their manifesto.

After winning power, the PH government made some progress towards fulfilling its commitment towards women, which includes the Sexual Harassment Bill.

As the new government is a new coalition not bound by the manifesto of the competing parties in the 2018 general election, we hope this will not cause the government to work without focus on issues related to women’s rights.

We hope the new government, if it manages to survive beyond the next sitting of Parliament, will outline the plans and policies it intends to pursue in this matter.

Gender equality remains a challenging task in Malaysia. The year 2020 was supposed to be the year that Malaysia achieved the status of a developed nation; however, we are clearly not yet up to the mark.

Gender equality is one of the areas in which there is much more room for us to make further improvement. We hope the policy makers in the country, including governments at all levels, will step up their efforts in ensuring women become equal partners in nation-building.

Recognition and showing the value of women and their contributions should be on sown and practised on a daily basis and not via remembering on just one day in a year.
WITHOUT WOMEN – THERE MAY BE NO MEN