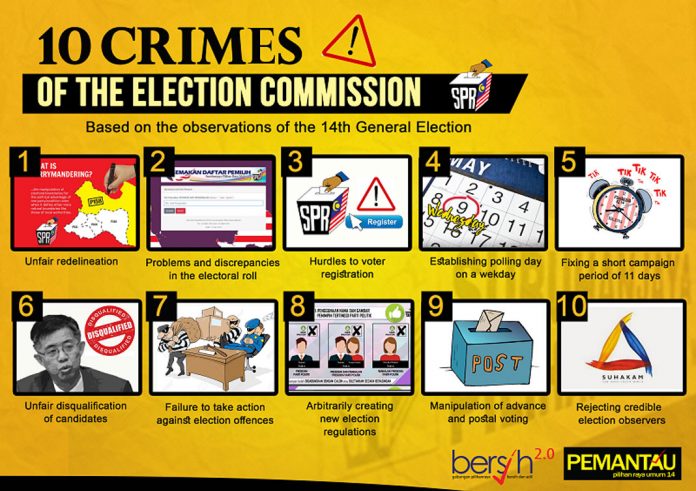 Three days before polling, Bersih 2.0 laid down the almost insurmountable challenges facing voters. We look back at what they were.

As an electoral reform group and the largest peoples’ movement in Malaysia, the Coalition for Clean and Fair Elections (Bersih 2.0) had been monitoring the electoral system and process since its founding in 2006.

While many flaws and manipulation were exposed before – in particular via the historic 2013 People’s Tribunal on Malaysia’s 13th General Elections – Bersih 2.0 was extremely concerned about the problems ahead of the 2018 general election.

On 6 May, Bersih 2.0 announced its preliminary findings on the integrity of the electoral process and system in the 2018 general election. These findings were based on its monitoring of the electoral system since 2006 and the Pemantau (Election Observers) campaign which focused on election offences in the past six months.

Bersih 2.0 concluded that the Electoral Commission (EC) of Malaysia failed to command public confidence in managing the electoral process and system of Malaysia, in particular for this general election. The seven members of the Electoral Commission – Mohd Hashim Abdullah, Othman Mahmood, Md Yusop Mansor, Abdul Aziz Khalidin, Sulaiman Narawi, Bala Singam Karupiah, Leo Chong Cheong – have committed ten serious crimes against the voters in Malaysia, and in so doing ruined the integrity of the general election

The ten crimes are:

The Electoral Commission also disregarded due process by rushing through the boundary changes with unprecedented speed. It was clear that the Electoral Commission, the government, and the Yang Di-Pertua Dewan Rakyat were adamant to pass the report at all cost before the general election. The Attorney General’s Chambers was complicit for stopping voters from challenging the constitutionality of the boundary changes in court.

Failure to clean up the electoral roll and preventing phantom voters

The Electoral Commission failed to maintain a clean and accurate electoral roll. Some 15% of voters (2,123,973 voters) in the electoral roll had incomplete or no addresses. Many voters were deliberately and illegally transferred to marginal constituencies by political parties to sway the results, causing abnormally high number of voters being registered using similar or non-existent addresses (estimated over 500,000 voters).

These irregularities continue to persist although the 2011 parliamentary select committee on electoral reform had affirmed the problems and recommended that the Electoral Commission clean up the electoral roll.

Such flaws in the electoral roll allowed opportunities for irresponsible parties to organise phantom voters to illegally vote during election day. Complaints were filed to the Electoral Commission, but no action was taken to remedy the situation. The Electoral Commission and Attorney General’s Chambers continued to use Section 9A of the Elections Act 1958 to deny the right of voters to challenge the integrity of the electoral roll in the courts.

The Electoral Commission failed in its duty to register eligible voters and caused widespread disenfranchisement of voters. Some 3.8m Malaysians (20% of total eligible voters) remained unregistered and were unable to vote in the general election.

The Electoral Commission deliberately made it more difficult for voters to register since 2013 by removing the appointment of assistant registrar officers from political parties. Meanwhile, the commission approved such officers from Barisan Nasional and government-friendly organisations.

The Electoral Commission did not take action to stop the abuse of the registration objection process under Regulation 15 of the Elections (Registration of Electors) Regulations 2002. On the one hand, frivolous and random objections by irresponsible parties were allowed. While on the other hand, genuine objections against phantom voters who were illegally transferred were disallowed.

Setting polling day on a Wednesday

The Electoral Commission suppressed voter turnout by deliberately setting polling day on a Wednesday, without providing any reasonable explanation for the decision and as to why a more accommodating date was not set. An analysis of past elections showed that voter turnout would be lower when elections are set on a weekday.

This unreasonable and unexplained decision caused massive inconveniences to millions of voters who needed to travel home to vote, especially those working out-of-town or overseas.

The Electoral Commission deliberately set only 11 days for the campaigning period, which is the bare minimum as required by law. Again, no reasonable explanation was provided.

It is believed that this was done to suppress the scope of the election campaign and voter outreach, especially by the opposition political parties who had limited access to the mainstream media. In effect, voters were denied adequate time to receive information to make an informed decision.

Arbitrary disqualification and prevention of nominations

The Electoral Commission gravely violated the right of citizens to be nominated as election candidates, and by extension the right of voters to vote for their preferred candidate, as provided by the Federal Constitution.

On 28 April 2018, two individuals were denied nomination. In the case of Tian Chua, the Electoral Commission acted against a court ruling which declared that Tian Chua was not disqualified as a Member of Parliament and was eligible to stand for elections. In the case of Streram Sinnasamy, the police and election officers physically prevented him from entering the nomination centre because of a trivial administrative issue which had no legal basis.

Over 400 election offenses involving bribery and vote buying, treating, and gifting were recorded before and during the election period.

The Electoral Commission failed to prevent, stop, or take action against these widespread election offences. As such, the commission cultivated and allowed for a crippling and corrupt election culture, where money and gifts were condoned and openly used as part of campaigning activities to win votes.

The Electoral Commission also failed to set appropriate guidelines on a caretaker government despite repeated calls by civil society to do so. This resulted in the federal government, state governments, caretaker ministers, and caretaker ExCo members openly misusing government machinery, power, and resources for their election campaigning purposes.

Instead of focusing on the other serious offences, the Electoral Commission chose to focus on making arbitrary and unreasonable election regulations at the very last minute without adequate public consultation.

In particular, the commission supressed the freedom of expression of political parties and candidates by ruling that campaign materials could only contain photos of the candidates and the main leaders of their party. The ruling was a clear attempt to target and limit the opposition from advertising their prime ministerial candidate.

The commission had no business in regulating the content of campaign materials and activities unless they were malicious or promoted ill-will. Even so, such actions have to be proportionate, reasonable, and enforced equitably against all candidates and political parties.

The Electoral Commission allowed for the registration of over 3,500 phantom advance voters in three military camps that had yet to be completed. Polling agents discovered several cases where duplicate postal ballots were issued to a same postal voter.

The Electoral Commission was slow in finalising the number of domestic postal voters in each constituency despite repeated calls to do so. Meanwhile, many overseas postal voters complained that they received ballot papers late resulting in them being unable to send back their votes in time for the election.

In an incident, Majlis Belia Malaysia (MBM), one of the local organisatiosn appointed as election observers, was found organising an event promoting BN candidates.

On the other hand, the commission also denied the application of other more experienced and legitimate election observer organisations and the Human Rights Commission of Malaysia (Suhakam).

Having taken into account all of the above and the multiple failures in the electoral process and system, Bersih 2.0 inevitably concluded that the general election was already not clean, free, or fair even before polling day.

Bersih 2.0 held the Electoral Commission responsible and guilty for the 10 crimes above as it is the primary body responsible for managing and conducting elections in Malaysia. Bersih 2.0 is compelled to do so to highlight the severity of the problems surrounding the general election.

At this point, Bersih 2.0 addreseds the voters of Malaysia.

To all voters of Malaysia:

The Electoral Commission has failed us and has not uphold the integrity of our elections.

Although the general election not be clean, free, or fair, Bersih 2.0 believes that you will play an important role in the upcoming elections. It is now up to you. The electoral fraud and manipulation can only be overcome if you and all Malaysians turn up to vote as we have all done in 2008 and 2013.

Bersih 2.0 therefore calls upon all voters to vote against electoral fraud and manipulation on 9 May 2018. As a sign of protest and solidarity, Bersih 2.0 also encourages all Malaysians to wear yellow, tie yellow ribbon, paint your Facebook yellow two days before polling day, on May 7 and 8. 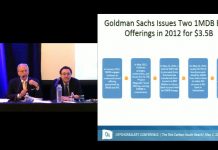 A good list of charges against the EC. An interesting question is: What to do with the just redelineated electoral constituencies that the Federal Constitution says can only be changed after 8 years? The groundswell of anti-BN/Najib sentiment enabled PH to defeat BN in GE14 despite the unfair electoral system, but the unfairly mal-apportioned and gerrymandered constituencies would remain a serious hurdle to PH in GE15. So, how can these constituencies be revised or redelineated for GE15, due in 2023, i.e. before the constitutionally stipulated 8 year duration? One way is to go to court again and convince the court to declare that the existing constituencies violate the requirements of the Federal Constitution. Is there any other way?

Sack all the top … in EC. They should be brought to the court of law. The integrity and bravery shown by Bersih 2.0 people make them a good replacement for all the dishonest EC members.