The Coalition for Free and Fair Elections (Bersih 2.0) is calling on concerned voters to sign up as objectors to the second display of the proposed redelineation boundaries in Selangor with immediate urgency.

Bersih 2.0 aims to get 100,000 Selangor citizens to sign up as objectors. According to procedure, a valid objection to the proposed redelineation must be represented by a spokesperson and accompanied by 100 signatures or more to endorse the objection. Bersih’s call for the 100,000 objectors is a show of the rakyat’s protest against the continuation of unconstitutional redelineation.

While the second display of the proposed redelineation within Selangor has reverted to more or less the same boundaries used in 2013, this does not mean that the current constituencies for both state and parliamentary seats are exempt from malapportionment and gerrymandering.

It is the duty and right of the voter to protect and ensure that the strength of a vote is equally represented across Malaysia. Those who are interested to be a part of the process may assist in any or all of these ways:

Bersih 2.0 has identified locations within Selangor that will act as objection collection centres and can be found here: dart.bersih.org/pusatbantahan

This will help to facilitate better coordination and mobilisation of concerned voices in objecting to unfair electorate boundaries.

The last day to submit objections is 14 February 2018, after which the Electoral Commission will launch inquiries to discuss the concerns stated in the letter of objection. The final report on redelineation will be sent to the prime minister, who will then table it in Parliament for adoption. 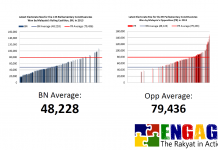 2018 general election: Clamour for change is strong and palpable