Mustafa K Anuar writes that the mainstream press’ disregard of the Bersih phenomenon was tantamount to their abandoning journalistic ethics and a commitment to truth and social responsibility.

The morning after. The pro-government mainstream press splashed headlines, news reports, so-called “analyses” and photos that essentially and predictably mocked, discredited and demonised the leaders, supporters and participants of the Bersih 2.0 rally in Kuala Lumpur on 9 July.

For instance, the Sunday Star carried a front-page headline that said: “Defiant”. The bold headline accompanied a huge picture of a face-off between the Federal Reserve Unit and other police personnel on the one hand and the protesters on the other at the temporarily closed Puduraya bus terminal.

Why “defiant”? This is because the political backdrop that had been played up and emphasised by the powers-that-be and with the help of their compliant mainstream media as well in the run-up to this event was that an “illegal” rally was being planned.

Surely, as this logic would insist, to go along with that “illegal” gathering, nay defying the restriction order and police warning, was an act of defiance of the highest order on the part of the protesters.

If anything, if we follow this argument through, the demonstrators “deserved” to be depicted as “troublemakers” (and possibly treated, or rather mistreated, as such).

In the absence of a vital reminder in the news coverage about the democratic right of ordinary Malaysians to exercise their freedom of assembly and expression peacefully as enshrined in the Federal Constitution, such a depiction was aimed at gaining traction among the less politically savvy or simply naive Malaysians.

It therefore “makes sense” for Prime Minister Najib Razak, who was quoted all the way from Kuala Terengganu, where he was attending a Bakti sports competition on Saturday itself, to have expressed his relief that the “illegal” rally “did not cause serious harm to people and property” (Headlined on page 2, “PM glad no real harm caused”).

In other words, one would expect anarchy and vandalism at the very least from people who seemingly had the penchant for breaking laws — but, alas, the police were able to arrest that chaotic eventuality.

On the same page as the PM’s story, the “people’s paper” ran its editorial, headlined “The game is over, time for everybody to move on”, which borders on mischief. Surely participating in the rally knowing fully well the possibility of incurring the wrath of chemically-laced water and tear gas was no game at all.

Indeed, the people had made a calculated move to not only sacrifice their precious Saturday but also possibly bear the brunt of the state apparatus. No picnic in the park on Saturday, this one.

Besides, some of the things posed by the editorial made one wonder whether the paper was indeed located on a different planet: For example, “was there no better way of putting across the message, cause or demand for a clean general election?” (yes, the Bersih 2.0 folk had expressed grievances to the Election Commission (EC), but had received an unsatisfactory response); “Whether or not a street demonstration should be the last resort for aggrieved parties, it should seldom, if ever, be the first” (yes, because of the lukewarm response of the EC, the rally became the last resort); and “The Yang di-Pertuan Agong had advised rally organisers against a street protest, and the prime minister had approved in principle a stadium rally” (yes, there was an attempt by the Bersih 2.0 organisers to come to the negotiation table, as rightly suggested by the King, with the federal government leadership but it wasn’t reciprocated eventually). So were the Bersih 2.0 folk still playing a game?

To be sure, there was space given to the Bersih 2.0 organising committee to briefly express their views pertaining to the rally, but this was put in the inside pages, placed next to a news item on Perkasa. MCA president Chua Soi Lek, to which this paper is politically affiliated, was given coverage in an earlier page where he protested that “Bersih’s protests make no sense.” Clueless in Kuala Lumpur.

As if not to be outdone, the New Sunday Times (NST) “graced” its entire front page with a picture of an unknown person (presumably one of the protesters), face masked and donning military fatigues, about to throw something into the air. In other words, the kind of “combatant” that could wreak havoc in the otherwise calm, but jammed streets of Kuala Lumpur.

This picture, which might remind you of the stormy Palestinian Intifada of yore, was juxtaposed with the quizzical headline “Peaceful?”. This was possibly aimed at questioning the public assurance of the Bersih 2.0 rally organisers that it would be free of violence.

Like the coverage of the Sunday Star, the NST’s was meant to convey a message to the readers that street demonstrations of this nature inevitably lead to chaos and a breakdown in law and order, and are a danger to national security and hurt businesses big time. Hence, the need by the police to lock down the key entry points into the city and conduct road blocks, among other things.

The second page of the paper ran the expected headline, “Four hours of madness”, that was accompanied by a big photo of demonstrators drenched with the chemically-laced water in front of Menara Maybank in Kuala Lumpur, and a fallen motorcycle parked by the roadside, presumably knocked down by the running crowd. A picture of disorder, in short.

A cursory look at the headlines in the following pages would give an indication of the newspaper’s ideological slant: “Govt not against fair election, says Najib”; “Hisham: King’s advice not heeded”; “‘Swift action contained rallies’”; “16 children among 1,667 held”; “Gloom as shoppers shy away”; “Demos ruin wedding plans”; and then the so-called think pieces of the paper’s Who’s Who such as “Sheer display of arrogance and political posturing”; and “Apply the law on rally organisers.”

The only space allotted to the Bersih 2.0 organisers by the newspaper was the one buried in the inside pages that reported of Pas threatening another rally if the authorities didn’t release their leaders and other Bersih 2.0 committee members; and next to it a news story indicating Bersih 2.0’s demands, but this without the steering committee members being given a voice to speak in their own right (“4 more demands added to 2011 list”).

The unmistakable and indefatigable Mingguan Malaysia screamed a headline “Usaha polis berjaya” (the police’s effort bears fruit) to convey the message that the police force managed to pre-empt the “illegal” attempts of the Bersih 2.0 folk to march to the Stadium Merdeka, thus saving KL from calamity.

It is the kind of “news” that was supposed to induce a sigh of relief among its readers. This news item carried with it a big photo of a scene where a few of the demonstrators were seen to have thrown certain objects at the police truck that was moving in front of them, an act which the daily deemed “wild” (bertindak liar).

Undoubtedly, the paper, like many other dailies and TV stations in town, put heavy emphasis on the “illegality” of the well-attended rally that was painted to be disorderly.

Also on the front page was a quote from the prime minister who expressed, as was similarly reported in the Sunday Star, relief and thanked the police force for having managed to ensure that the rally didn’t end with a disaster to human lives and property. Najib added that those who didn’t participate in the “illegal” rally were Malaysians who cherished peace and harmony and paid heed to the advice of the King, the Selangor Sultan and the (federal) government. If-you’re-not-with-them, you’re-with-us kind of simplistic argument.

There’s one whole page dedicated pictorially to the rally and here was where the dots were made to connect, judging from the captions of the selected photos: “Akur” (Compliance) accompanied a photo of Perkasa leaders holding a press conference, where it was said that the right-wing group refused to enter the fray as they didn’t want to go against the advice of the King. “Patriot” obviously showed a photo of the Umno Youth holding a counter-rally. “Jadi mangsa” (Victimised) accompanied a photo of LRT passengers waiting tiredly for their delayed train. “Ganas” (Violent) showed a demonstrator throwing back a gas canister at the police. “Lengang” (Quiet) explained the quietness in the shopping area along Jalan Tuanku Abdul Rahman. “Layanan baik” (Good treatment) showed the detained demonstrators being “well treated” as exemplified by their ability to pray in the detention area. “Turut serta” (Participating) showed the leader of the Pertubuhan Seni Silat Lincah Malaysia, Omardin Maju, joining hands with the Patriots. “Ingkar” (Disobedient) obviously referred to the photo of the Bersih 2.0 leaders in Kuala Lumpur who defied the ban order on them. And last but not least: “Sesak” (Jammed) depicted a Kuala Lumpur street that was jam-packed with vehicles caused by, surprise, surprise, the Bersih 2.0 rally.

Like their political masters, the mainstream press and other media had placed so much emphasis on the so-called “illegality” of the rally (and also its consequent violence, or the threat of violence — coming from the motley crowd that had been made out to be unruly) that this “illegality” factor had eclipsed, or drowned out, the eight demands of the Bersih 2.0 organisers and supporters.

Additionally, the Bersih 2.0 steering committee was not given enough space to explain in their own voice their side of their story: why they did what they did after all avenues were exhausted.

In a sense, the mainstream press treated the “illegal” Bersih 2.0 rally like a yellow plague, which is most unfortunate given that the aspirations of the Bersih 2.0 organisers had transcended them, and subsequently caught the imagination of many Malaysians, the rally participants and the “silent majority.”

Besides, this rally has assumed national significance for it managed to amass tens of thousands of people on the streets of Kuala Lumpur despite the many obstacles placed against the participants such as pre-rally arrests (including MP Jeyakumar Devaraj and his PSM colleagues who are still being detained), roadblocks, hotel room checks, shutdown of bus stations and selected LRT stations, the threatening Friday sermons and warning circulars to civil servants.

And yet, the press as a whole chose to ignore, nay belittle, this “yellow elephant” in their very newsrooms. It’s a cruel mockery of the dreams of ordinary Malaysians, irrespective of their ethnic origins, who crave for a better tomorrow. Just look at the outpouring and sharing of sentiments and observations of the Bersih 2.0 participants in the online newspapers, especially those who felt “truly Malaysian.”

Equally important, for the mainstream press to disregard this social phenomenon and all its ramifications is tantamount to their abandoning, if not betraying, journalistic ethics, and a commitment to truth and social responsibility.

Ignore all this at the mainstream press’ own peril for it would only heighten their credibility deficit. 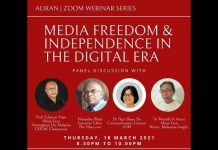