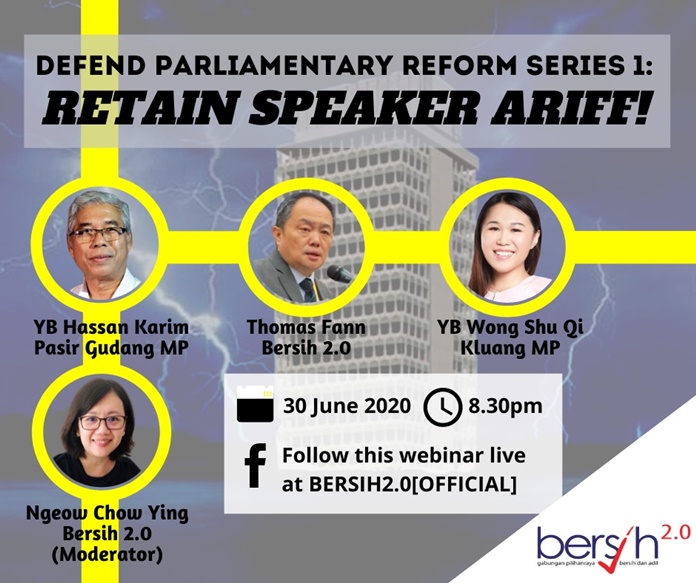 The other deputy speaker, Rashid Hasnon, who is an MP aligned to Muhyiddin is unaffected by the move. Such a motion to remove a Speaker of the House mid-term is unprecedented in Malaysia as the position is usually only vacated when Parliament is dissolved, upon death or resignation.

By convention, the house speaker of a Westminster parliament should be above partisan politics. If he or she is an MP, upon election by fellow MPs, the speaker must retire from party politics to function as the impartial presiding official in the house.

In Malaysia, however, parliamentary speakers are traditionally treated as gatekeepers for the Executive, blocking motions or bills tabled by the opposition or even restricting speeches, greatly undermining the impartiality of the office.

Speaker Ariff, who is not an MP and has retired from party politics since his appointment at the start of the 14th Parliament in 2018, has transformed his office with impartiality and a genuine appreciation for multi-partisanship.

As citizens and taxpayers, we pay RM44m a year in monthly allowances alone, including RM16,000 for MPs, RM31,000 for the Speaker and RM22,000 for deputy speakers, to maintain the Dewan Rakyat.

As Malaysia is facing both a Covid-19 outbreak and a global recession, we cannot afford for the Dewan Rakyat to be reduced to being a RM44m-a-year white elephant or a mere rubber-stamp of the executive.

We hereby demand all MPs to vote against the motion to remove Speaker Ariff to continue the reforms he has embarked, instead of replacing him with a partisan character.

We urge all MPs to also rally behind Ariff to continue the unprecedented reforms that have taken place under his speakership:

And more reforms that should be introduced:

READ MORE:  Annulment of emergency ordinances must be tabled and voted upon immediately

We demand that MPs hear the public outcry for a functioning and competent Parliament, respect their mandate as the people’s voice – instead of just being a number to make up 112 (a simple parliamentary majority) – and reject Muhyiddin’s motion to remove Speaker Ariff on 13 July 2020.

In conjunction with our call to defend parliamentary reform, Bersih 2.0 calls on all Malaysians to support this call to retain Ariff as the Speaker of the Dewan Rakyat by signing the online petition we initiated at https://www.change.org/KekalkanAriff

We are also conducting a series of webinars where we will be discussing different aspects of parliamentary reforms needed to strengthen this institution.

The first of the series will be held tonight at 8.30pm, when we will have on the panel our chairperson, Thomas Fann, Pasir Gudang MP Hassan Karim and Kluang MP Wong Shu Qi. The session will be moderated by Bersih 2.0 treasurer Ngeow Chow Ying and can be viewed live on our Facebook page at https://www.facebook.com/BERSIH2.0/