The recent sudden increase in the list of persons banned from entering Sarawak is shocking, says Bersih 2.0.

The denial of persons entering into Sarawak and including Sabah is not only undemocratic and undermines voters’ right to be informed in the upcoming state elections, but most of all, it is illegal.

Bersih 2.0 holds Sarawak legal adviser JC Fong to be dutybound to explain to Malaysians how “election campaigning” or “championing of free and fair elections” has become “illegitimate” in Sarawak to warrant deportation of opposition leaders if Section 67 of the Immigration Act is not violated. The affected parties deserve to know his position and his role in the matter to decide the next course of action on Adenan and him.

Bersih 2.0 calls upon the Sarawak legal adviser to tell the Malaysian public if he was consulted by Sarawak Chief Minister Adenan Satem in barring the entry of and deporting politicians and activists and if he has advised the Chief Minister to do so.

The banning explicitly violates Section 67 of the Immigration Act, 1959/63 which states:

(Subsection 66(1) concerns the “restriction on citizen’s right to enter an East Malaysian state”.)

The most recent banning fervour is related to the election, ranging from opposition campaigners to Bersih activists who are championing free and fair elections. The list of persona non-grata also includes other opposition leaders like Mohamad Sabu, Rafizi Ramli, Teresa Kok, and Bersih 2.0 activists such as Ambiga Sreenevasan, Maria Chin Abdullah, Wong Chin Huat and Mandeep Singh.

Chief Minister Adenan Satem has also insinuated that Wan Azizah, Lim Kit Siang, and Lim Guan Eng may be added on to the list.

Bersih 2.0 warns that Adenan must not forget that once the State Assembly has been dissolved, he is no longer the Chief Minister and that the Election Commission should take over the management of the coming elections. The banning of any activists and politicians by Adenan Satem or by any of those in the state government when dissolution had set in definitely shows poor governance and continuation of the illegality.

Adenan’s illegal action has given a bad name to Sarawak’s internal immigration power. 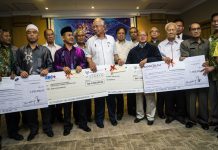 Sarawakian and Sabahan do not want to see racial and religious disharmony of west Malaysia to spread to Sarawak and Sabah. Don’t hide behind fair election propaganda.