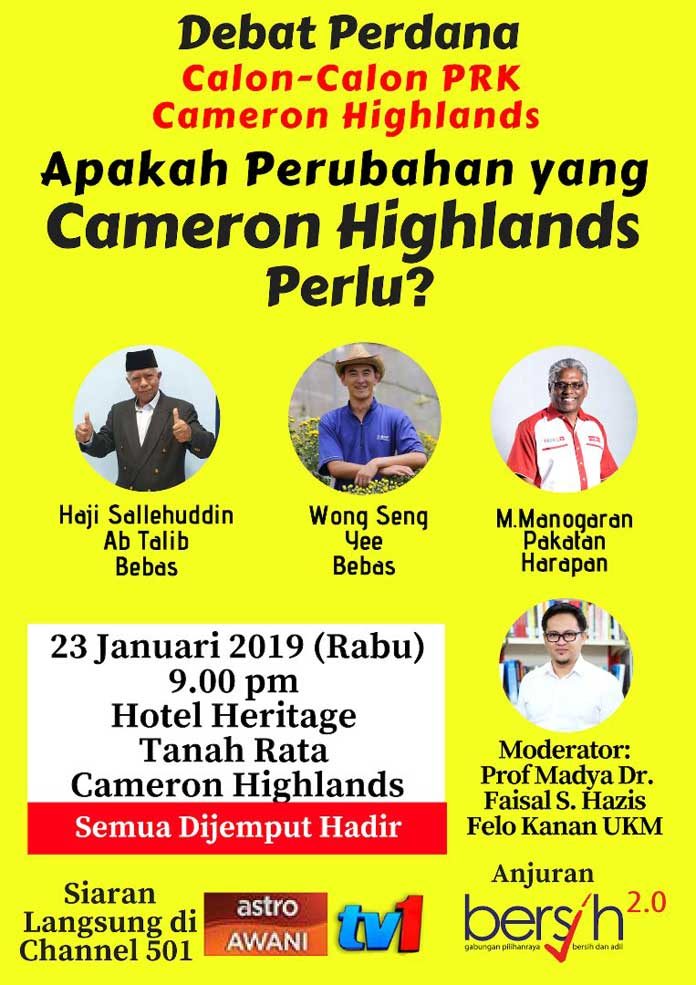 The Coalition for Free and Fair Elections (Bersih 2.0) refers to Pahang Menteri Besar Wan Rosdy Wan Ismail’s statement on 21 January 2019 at an officiating ceremony for a hall at the Tien Hou Temple, Habu, Cameron Highlands (Malaysiakini,””Let’s help each other, Pahang MB tells voters”).

He reportedly told the audience that he did not want to promise anything with regard to temporary occupation licences (TOLs), except that the local farmers’ lot would improve compared to what it was now.

He said, “I hope you all understand that we are all friends. We want to help but you too must help. If we help each other, that’s even better.

“But I don’t want to promise we can solve everything. You have to remember, if I can solve it, no problem! I will help,” he said.

He then urged the audience to vote for BN on polling day on 26 January because land matters are under the state government’s jurisdiction.

Bersih 2.0 views Wan Rosdy’s alleged statement with grave concern as he is reminding the voters in Cameron Highlands that, as the state Menteri Besar, he has the power to decide land matters. To a farming community such as that in Cameron Highlands, security of land tenure is a matter of great importance as their livelihood depends on it.

Bersih 2.0 believes that political parties should not abuse their power as federal or state government to turn incumbency into a basis for patronage to discriminate against constituencies that do not vote for their parties. Governments have a responsibility to discharge their duty to all citizens without bias and carry out their duties based on clear criteria and existing policies.

Wan Rosdy should also be reminded that such remarks could be deemed as undue influence, an election offence under Section 9 of the Election Offences Act 1954, or even abuse of power as defined under Section 23(1) of the Malaysian Anti-Corruption Commission Act 2009. The election offence under the former act carries a penalty of imprisonment for up to two years, a RM5,000 fine or both while the penalty for abuse of power carries a jail term of up to 20 years.

Bersih 2.0 urges Wan Rosdy to immediately clarify his remarks and give an assurance to Cameron Highlands voters that he will carry out his duty as the Menteri Besar and work to resolve all outstanding issues, especially land issues, with whoever gets elected on 26 January. Voters should not be subjected to such threatd to their livelihoods when casting their votes.

To me , it is more of a desperate plead . Not a threat.
Since Jibby is seen as the main man doing the campaign for Umno. Therefore it is a sort of a whining plead. The weather will be very gloomy for BN if Cameron Highland rejects umno.
After decades of abuse of power, rampant corruption and neglect, wouldn’t it be better to give PH a chance to run the show for the coming 4 years? OTOH, most of us dislike Mahathir!
But PH is not about a 93 years old .

Dun feel is a threat when reading this article in English version. Is like “ help me to help you”? Sounds ok.