At 3.12pm this afternoon, the Bersih 2.0 office in Petaling Jaya was raided. Bersih 2.0 reports what happened next.

In an ambush that trampled on the rule of law, ten policemen from Bukit Aman led by ASP Wan Aedil barged into our office citing that the raid was conducted under Section 124(C) of the Penal Code in relation to Bersih’s alleged OSF funding.

When asked to produce a warrant, he said one was not needed. He also refused to elaborate on the evidence or documents that they were looking for. Instead, he and his officers threw their weight around and harassed the staff.

The police officers rounded everyone up and took their mobile phones and ICs. They were rude and acted like thugs, pushing Thomas aside and, at one point, attempted to cuff Mandeep for using his phone, which they violently snatched away.

While lawyers Melissa Sasidaran and R Sivarasa were still allowed in the office, Wan Aedil had threatened to kick them out several times as he was getting “annoyed” with their questions. They were eventually asked to leave.

No one else was allowed in including other lawyers Ambiga Sreenevasan, Robyn Choi, and N Surendran.

The police officers were later joined by four officers from MCMC who assisted in collecting evidence.

In total, 10 laptops (including chargers), pen drives, hard disks, payroll files, bank statements, and documents pertaining to The May 18 Foundation were seized. They also took several photos of the office. The raid lasted two hours, ending at 5.15pm.

Maria and Mandeep were arrested and taken to IPD PJ. They will be detained for the night and then brought for remand. Maria is being investigated under Section 124C of the Penal Code for activities detrimental to parliamentary democracy while Mandeep is being investigated under Section 147 for rioting and Section 511 for acts punishable with imprisonment. They have been taken to IPK Kuala Lumpur and will be detained for the night before being brought for for remand.

Bersih 2.0 condemns the raid as a blatant abuse of power and pure harassment and intimidation. No warrant or legitimate reason for the raid and arrests could be provided. The authorities have resorted to such desperate measures in a vain attempt to stop the Bersih 5 rally.

The laws of this country are being turned on its head. We have abided by the law but we get hauled up. Meanwhile, red-shirt leader Jamal Yunos, who can easily be charged under several sections of the Penal Code, still roams free. The double standards are glaring.

If the authorities hope that this act of pure intimidation will scare us into submission, it will not happen. Instead, it has strengthened our resolve to continue with the Bersih 5 rally.

Maria’s and Mandeep’s arrests have changed nothing. Bersih 5 will go on as planned and we hope that this heavy-handed action on the part of the authorities will spur Malaysians into coming down to the streets tomorrow not just to demand institutional reforms but to protest injustices happening in the country. 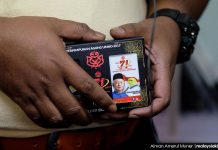 They ate my chocolates!

Psychologically prepared to be detained for 48 hrs. So I have no fear. One for all & all for one!