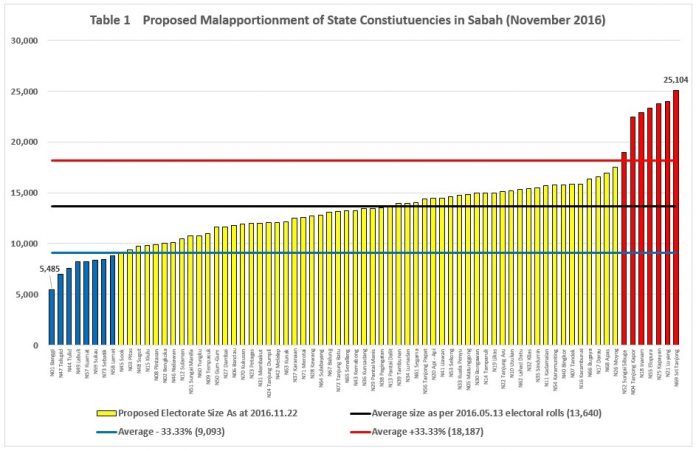 The Coalition for Clean and Fair Elections (Bersih 2.0) calls on Prime Minister Dr Mahathir Mohamad to drop the obsolete 2017 delimitation proposal for Sabah.

The proposal and the parliamentary order to adopt it were tabled on 8 July 2019 and the debate is scheduled on 17 July.

Bersih 2.0 calls upon prime minister to withdraw the malicious, flawed and obsolete 2017 delimitation proposal in Sabah from Parliament. Previous federal governments have caused uncountable episodes of pains to Sabah with bad and wrong decisions. This must not be another.

Instead, a solemn pledge under Promise 17 in the Buku Harapan should be made a reality: “The Pakatan Harapan Government will ensure a fair ratio in future delimitation exercises. We will announce transparently to the public the formula being used to determine the number of voters and the size of each constituency.”

If the obsolete proposal is not withdrawn, Bersih 2.0 urges all parliamentarians who believe in democracy to vote against it. Specifically, the 25 parliamentarians from Sabah must not vote to adopt the malicious, flawed and obsolete delimitation plan that disadvantage Sabahans, especially its youth.

Bersih 2.0 reminds the prime minister that the government’s bold moves to lower the voting age from 21 to 18 and allow automatic registration will expand the electorate by 8 million, adding to the current 14.9 million.

As the expansion of electorate will exacerbate malapportionment, all states with severe malapportionment of federal and state constituencies should have another round of delimitation after both the lowered voting age and automatic registration are fully implemented.

Therefore, implementing the obsolete 2017 delimitation proposal for Sabah will be wasting the Electoral Commission’s resources and inconveniencing all stakeholders if another round of delimitation will have to start soon.

If the obsolete 2017 proposal is put in place and kept effective till 2025, the lowering of the voting age will become a farce when excited new voters in urban areas find out their ballot is worth less than a fifth or a sixth of rural voters. The government and the youth and sports ministry will bear the brunt of the anger of the youth who would feel cheated.

Bersih 2.0 points out that, according to the Electoral Commission’s proposal in November 2016, Sabah’s largest state constituency, N69 Sri Tanjung, would have 25,104 voters, or 4.5 times the number of voters in the state’s smallest constituency, N01 Banggi, with only 5,485 voters.

The previous Electoral Commission’s deliberate plan to malapportion parliamentary and state constituencies in Sabah was meant not only to distort Sabah electorate’s choice – but also to maliciously sow division and discontent between regions and communities in the state, to facilitate the “divide and rule” scheme by power outside Sabah.

The expansion of electorate with a lower voting age and automatic registration may add some 300,000-400,000 to Sabah’s 1,117,337 voters by 2018. As these newly eligible citizens disproportionally live in urban centres, malapportionment insidiously planned by the previous Electoral Commission will only get worse.

The Electoral Commission submitted the delimitation proposal to former Prime Minister Najib Razak on 14 February 2017, but the latter did not table it for adoption by Parliament. This exploited a loophole in Section 9, the 13th Schedule of the Federal Constitution, which does not set a deadline but merely states “as soon as may be” for that to be done.

Unintendedly, Najib has kept the door open for Sabah’s redelimitation to be done right.

Bersih 2.0 expresses deep regret that both the prime minister and the Sabah State Assembly have not been given proper advice to make the best decision for Sabah electorate on this matter.

While the Electoral Commission has no more role on the matter after submitting the proposal, both the prime minister and Sabah State Assembly can work together to empower Sabahans especially those aged 18-21 who will soon be enfranchised.

First, Bersih 2.0 calls upon prime minister to withdraw the malicious, flawed and obsolete 2017 delimitation proposal in Sabah from Parliament.

Second, Bersih 2.0 calls upon Sabah Chief Minister Shafie Apdal to promise another constitutional amendment to add seats in the state legislature after the expansion of the electorate. It is his moral duty to ensure that new and old voters in Sabah will be fully and equally empowered.

The Sabah State Assembly should amend the state constitution to add one or more seats to its legislature after the lowered voting age of 18 and automatic registration are implemented.

This would trigger another round of delimitation to be done properly and with integrity by the new Electoral Commission under the reformist leadership of Azhar Azizan Harun.

Delimitation should not be made into an ethno-religious issue

Bersih 2.0 anticipates some quarters will try to turn fair representation into an ethno-religious issue and wishes to debunk such propaganda in advance.

Contrary to popular misperception, the majority of the urban electorate are now Malay-Muslims. The victims of under-representation of urban constituencies are no longer just the non-Malays, but also the large number of Malay-Muslims in bottom 40% of households.

The under-representation of the Malay urban poor inevitably weakens their political power to improve their living standards and life opportunities. This will only fuel an inter-class divide and hostility among the Malays in the longer run. Even from an ethno-centric perspective, undermining democracy is undermining the Malay-Muslims’ wellbeing and future.

Report should be made public

Meanwhile, Bersih 2.0 also calls upon Parliamentary Speaker Mohamad Ariff Md Yusof to lift the embargo of the final version of the Electoral Commission’s obsolete proposal, which has kept the public in the dark till now.

Like other Malaysians, Sabahans have every right to know how their political future will be decided. No federal institutions should ever prevent them from holding their parliamentarians accountable.