There are emerging signs in Malaysia that could be a catalyst on how the political orientation of the country would be in coming months or even years if one deciphers the nation’s grievances amid the current health crisis and economic decline due to Covid.

Lately, youths protested in Parit Raja near Batu Pahat, Johor, over the government’s poor response to Covid, which has created a regressive socioeconomic impact. Many youths are already suffering from high unemployment and low income, made worse with inconsistencies and poor management of the pandemic.

The government’s handling of Covid has been dented by double standards, U-turns and lack of foresight of how to get the nation out of the present mess. The cabinet’s economic incompetency is glaring: foreign investors’ confidence is low, compared to their confidence in countries like Singapore and Vietnam.

The current Perikatan Nasional government, which was formed on the basis of Malay-Muslim unity, seems to lack a broad-based understanding of the complexity of issues facing the nation. Its ideological limitation seems to emerge, made worst by an absence of parliamentary scrutiny of its performance.

The deceptive picture it portrays as the defender of Malay-Muslim rights is defeated when there is such a high percentage of Malay youths unemployed and the poor who are deprived of many necessities. Pay a visit to flats in urban areas around the country, where the poor Malays and other communities are deprived of basic aid such as food and pampers for the sick due to bureaucratic requirements within government agencies that cause unnecessary delay.

READ MORE:  Myanmar: Thousands take to the streets of Yangon to protest against military coup

It is in these contradictory circumstances, which do not correspond to the frequent ethnic rhetoric by so-called defenders of race and religion, that one can understand the frustration of youths towards the PN government.

The nation requires diverse, innovative and competent minds in governance irrespective of race and religion to tackle the twin  health and economic crises, instead of the current mono-ethnic dominated government.

The youth protest shows that over time, the dynamics of unemployment and poverty issues could reduce the influence of ethnic-centric parties like Umno, Bersatu and Pas, whose superficial and limited ideology has affected the livelihoods of the youth and the nation as a whole. These parties cannot go on deceiving the people with an identity-centred ethno-religious ideology that does not serve the complex needs of a society where spiritual enlightenment, a progressive outlook, social security and economic empowerment are the key to socioeconomic progress.

What is obvious is despite various types of aid provided by the government, creating high-value and quality jobs is far more significant.

In this context, Malaysian youths irrespective of ethnicity or religion, could be the torchbearers of the future in reshaping politics of this country – by embracing multi-ethnic diversity and working on its strengths to address complex issues faced by the nation and by rejecting narrow ethno-religious political parties that do not serve the common good.

The Association for Community and Dialogue expresses solidarity with the suffering youth, as revealed in Parit Raja, and  supports the endeavour of youths to bring the spirit of youthfulness, vibrancy and integrity to the corrupt and diminishing ethnic-centric political system in the country which has failed to tackle substantive issues such as unemployment, poverty and environmental decline.

The youth protest is a significant sign of changing political dynamics in the country. – The Malaysian Insight 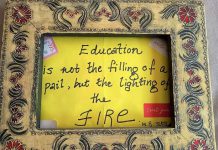