The Malaysian Bar is deeply concerned about the government’s decision, announced on 5 April 2019, that it is reneging on its pledge to accede to the Rome Statute of the International Criminal Court.

The government had signed the instrument of accession on 4 March 2019, and the Rome Statute was scheduled to enter into force for Malaysia on 1 June 2019.

In backtracking on its pledge, Malaysia has regrettably failed to honour its word, and instead chosen to remain in the minority of countries that have not signed, ratified or acceded to the Rome Statute — alongside the likes of North Korea, China, Saudi Arabia and Somalia — for reasons that are not entirely clear to the public.

The government’s decision is the second time in a mere five months that it has made a glaring U-turn on its pledge to accede to an international human rights instrument — the first one being the International Convention on the Elimination of All Forms of Racial Discrimination in November 2018.

Backpedalling on such a substantial matter does not augur well for Malaysia’s credibility and reputation as a member of the international community that upholds international norms and stands up for human rights for all.

The government’s decisions to pull out in these two instances lend to the perception that the government should actively engage with and educate all relevant stakeholders – as well as address their concerns regarding international engagements that could be misperceived to have a negative impact on the nation’s sovereignty.

The Malaysian Bar will persist with our longstanding advocacy for Malaysia’s accession to the Rome Statute – as well as to the remaining six core international human rights instruments and their optional protocols.

This piece, written on 9 April 2019, is reproduced from here and has been edited for style only. 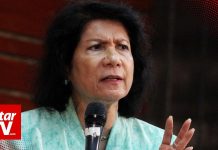 FOR GOODNESS’ SAKE, THE TREATY ALREADY BINDS US!

Lest we forget, an international treaty such as the Rome Statute automatically becomes the norm once 50 per cent plus one nation signs it. This comes under the principle of jus or ius cogens.

Once a treaty acquires this normative value, which comes under natural law, any other of the roughly 190 nations who do not sign it are still bound by it.

That being the case, and since more than a majority of 50 per cent plus one nation have already signed the treaty, I do not see why anyone should get upset about whether Malaysia signs or does not sign the treaty. The treaty already binds us!

No big deal. Nothing to prove. Just make sure Malaysians have enough to eat and a roof over our shoulders. Rome Statute or any other UN Conventions will not feed us. We have our Constitution to take care of All Malaysians.

Well US too has not signed the Treaty of Rome