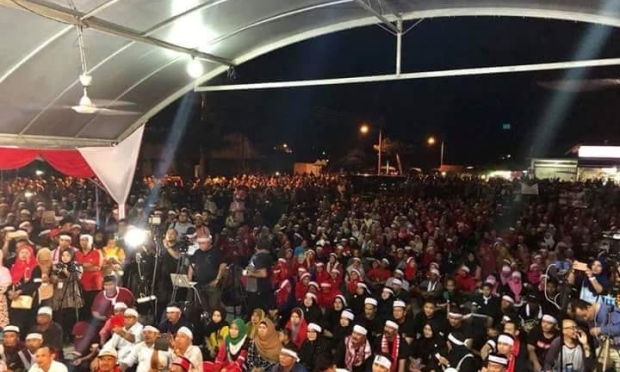 Umno leaders have to cease stoking and fomenting issues that can cause resentment among the Malaysian population; otherwise, their race-religious-centric party will see a speedy demise, writes Mohamed Arshad Raji.

It caused tension, disharmony and social unrest among peace-loving Malaysians. At a time when the nation is going through difficult economic and social stress, such a rally was least desired.

Patriot takes a serious view at the speeches made by Umno leaders, notably Annuar Musa, Tajuddin Abd Rahman and Lokman Adam, who accuse Pakatan Harapan (PH) leaders of failing to protect Malay interests and those of the Malay rulers, fearing an eventual takeover of the federal government by a DAP-led or a non-Malay government.

These Umno leaders obviously have lost their sense of reasoning. Their speeches are reflective of themselves being mentally challenged. They showed lack of respect for the elderly Dr Mahathir Mohamad through their childish name-calling – conduct uncharacteristic of Malay culture, which accords elderly people due respect – setting a bad example to the young.

Patriot urges these Umno leaders to conduct themselves as mature politicians and articulate national and social issues well, as this is the best way to redeem their lost credibility. They have to cease stoking and fomenting issues that can cause resentment among the Malaysian population. Otherwise, their race-religious-centric party will see a speedy demise.

Umno leaders ought to understand that the nation gained its independence from the British colonialists based on the latter’s belief that a multi-racial Malaya could survive the post-independent period based on the examples of racial harmony, tolerance and unity set by our founding fathers.

Umno must know that it is its own failures that led to a situation where the Malays lost out in pursuit of social and economic betterment, as compared to the other races, with the exception of a few Malays due to their close association and kinship with the political leadership. We now know that there are already several Malay billionaires, but they prefer to remain anonymous.

In the pursuit of a new Malaysia, Patriot urges all parties, especially the Umno leadership to set aside its feeling of animosity, if any, towards the newly elected PH government. Abandon the unhealthy tactic of stirring racial and religious issues. By all means function as an effective opposition and provide a check and balance on the ruling party.

The ‘Melayu Bangkit’ rally did not add value to the wellbeing and betterment of the nation and its people. Rather, it was a hindrance and a setback to our nation’s current quest for a united, progressive and prosperous Malaysian society.

ABOUT US
Aliran is a reform movement in Malaysia promoting justice, freedom and solidarity.
Contact us: [email protected]
FOLLOW US
Content may be reproduced without alteration but please attribute to aliran.com
wpDiscuz
27
0
Would love your thoughts, please comment.x
()
x
| Reply